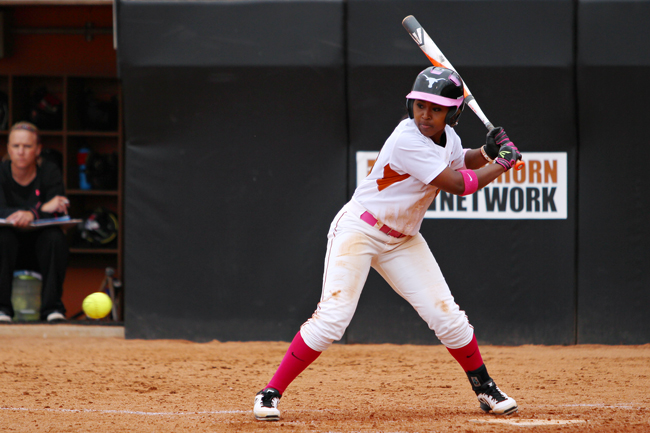 In another successful tournament, No. 25 Texas picked up four more wins to take it to a 13–7 record this weekend.

With six players hitting over .300 before the beginning of the Texas Invitational, Texas kicked off play on the Red & Charline McCombs Field with a nail-biting walk-off victory over Dartmouth. With two outs and a runner in scoring position, freshman third baseman Randel Leahy hit a game-winning double in the bottom of the seventh, scoring junior catcher Erin Shireman in the process. Freshman pitcher Erica Wright earned the win, improving her record to 4–3.

In the next game, Texas rotated its pitching staff, rekindling a veteran flame in the team.

“We’re moving them around a little bit and trying to make sure we have the best puzzle pieces set up and playing together,” head coach Connie Clark said at a press conference Wednesday. “So you may see a few different looks.”

One of these looks included senior pitcher Gabby Smith, who made her second start of the season over the weekend.

“[Gabby’s] still working back from an injury, and she’s ready to go but just hadn’t had the number of pitches under her belt yet,” Clark said. “I think she’ll be good coming into this weekend.”

On Friday evening, Smith threw a career-tying 11 strikeouts in six innings to earn her first win this season and help Texas take down Texas Southern, 5–3. Leahy and junior center fielder Lindsey Stephens hit a home run a piece, and Shireman had a triple and two RBIs to help Texas rally from two runs down to win the game.

As temperatures dropped Saturday morning, Texas also dropped the third game of the tournament. Sophomore second baseman Mickenzi Krpec hit her first long ball, but no one else made their way around home plate as the Longhorns fell to Lamar, 9-1. After a slight freezing-rain delay, Texas fell behind early on as Lamar jumped to a 5–0 after one inning of play. Over the course of the jagged performance, the Longhorns recorded three errors to go along with their solo run and left with a 2–1 record in the tournament with two games to play.

“Anytime that you get away from focusing on yourself and you get consumed with [who the other team is], you get in trouble,” Clark said.

Sunday, the Longhorns ignored Dartmouth for their second matchup of the tournament, this time taking a 7–1 victory against the Big Green. In a role reversal, Texas batted in five runs in the first inning to start off strong. Wright, with a career-high 10 strikeouts and six hits allowed, posted another solid performance to earn her a 5–3 record, though the Big Green broke her impressive 28-inning streak of not allowing an earned run.

In their final game of the tournament, the Longhorns once again dominated Texas Southern, this time with a 4–0 win.