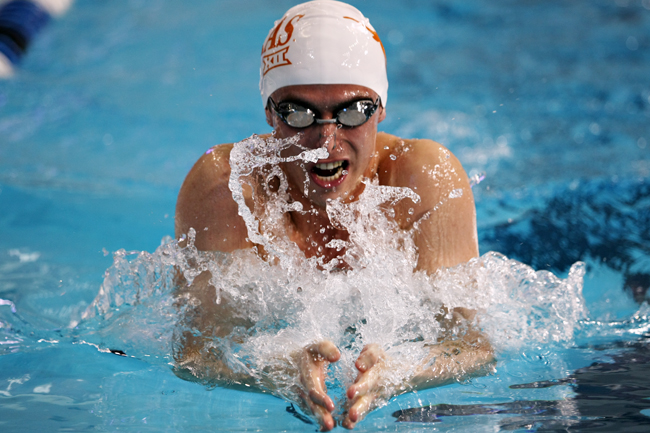 The meet wasn’t over yet, and the Tower was already bright orange.

The impending victories of the Texas men’s and women’s swimming and diving teams near the close of the Big 12 Championships on Saturday night were so certain that the tower reflected the conference wins before the final event sheet did. The men took home their 36th consecutive conference title, and were bumped back up to the No. 1 national rank, and the women kept the Big 12 trophy in Austin for the third year in a row.

Record-breaking executions characterized each team’s performance over the two-day event at the Lee and Joe Jamail Swimming Center. For the women, sophomore Murphy Bromberg, whom coaches named Women’s Diver of the Meet, captured a school and Big 12 record in the platform event, stringing together a couple of perfect scores to earn 411.30 points. Coaches named Texas head diving coach Matt Scoggin the Diving Coach of the Meet for both the men’s and women’s teams.

Many Texas women’s seniors, including Kaitlin Pawlowicz and Gretchen Jaques, finished their last Big 12 meet on a high note. Jaques captured the Women’s Swimmer of the Meet award as she won titles in the 100- and 200-yard breaststroke and the 50-yard freestyle. Pawlowicz won her first title in the mile freestyle with a time of 16:01.92.

“This [win] is definitely for the team,” said Pawlowicz. “It’s my last Big 12 meet, so it’s a little sentimental.”

Pawlowicz, who became just the third Longhorn in school history to break the 16-minute barrier back in December, still wants to improve.

“I wanted to be a little bit quicker, but I’ll definitely take 16.01 since it’s my second lifetime best,” said Pawlowicz, who currently holds the ninth best mile time in the country. “But [for the NCAA Championships] I definitely want to be better.”

For the men, coaches named All-America sophomore Jack Conger the Men’s Swimmer of the Meet — an unsurprising move. Conger cleared the 1:40 mark in the 200-yard backstroke, breaking his own meet record from a year ago in the event. His swim was only the third in Texas history to clock in under 1:40. Last week, Conger broke the American 200-yard butterfly record, a record previously held by Michael Phelps, with a 1:39:31 time. Freshman Joseph Schooling became the second-fastest Longhorn in the 200-yard butterfly and set a meet record with a time of 1:40.59.

Continuing the record-breaking trend, freshmen Brett Ringgold and Jonathan Roberts both accomplished feats that hadn’t been achieved since 2009. Ringgold won the Big 12 title in the 100 freestyle, while Roberts dominated the 1,650-yard freestyle with a time of 14:53.33, claiming his first conference title.