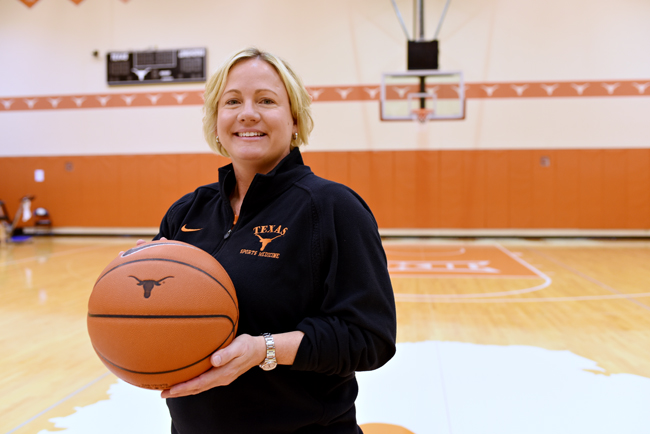 In late January, against a highly ranked Baylor team, senior forward Nneka Enemkpali drove to the basket and jumped near the hoop for an offensive rebound. On her way back down, she fell awkwardly, collapsing in excruciating pain as she suffered a serious knee injury. Immediately, associate athletic trainer Lisa Stalans rushed to her on the court.

What came next was the hardest part.

Soon, Stalans had the task of telling Enemkpali her college basketball career was over.

“It was heartbreaking for me to say that,” Stalans said.

It was something Stalans had done before and will most likely do again in the future. As an athletic trainer for the women’s basketball team, Stalans is in charge of the health and rehabilitation of the athletes. She evaluates them, tends to them and even delivers heartbreaking news — like she had to do with Enemkpali.

“It’s part of my job,” Stalans said. “I try to keep them calm and say, ‘You know, we’ll see what happens.’ It’s been stressful. When an athlete gets hurt, your biggest thing is getting them back on the court as soon as possible, but they just can’t go out there when they’re 50 percent.”

However, Stalans’ job also gives her the opportunity to deliver the good news when an athlete can return.

In December, freshman guard Ariel Atkins was out indefinitely after an ankle injury. But on Jan. 16, Stalans announced Atkins could return to the court. This week, Atkins won the Phillips 66 Big 12 Freshman of the Week honor for a third time this season. Stalans said it’s those moments when the athletes’ hard work in rehabilitation pays off that make her love her job.

Currently in her 14th season at Texas, Stalans has been with the women’s basketball team since 2009, longer than current head coach Karen Aston. Before that, Stalans spent nine years with the Texas soccer and women’s tennis teams after she arrived in Austin in 2000.

Texas has kept Stalans busy this season. Nine longhorns have missed at least one game because of injuries. But, fortunately for Texas, the injuries didn’t happen all at once.

“I do feel like one got hurt, and then I get that person back, and then I’d lose another one the next week,” Stalans said.

Her main concern is getting her athletes ready for their next step, which in most cases is just getting ready for the next game.

“We got back at three this morning from West Virginia, so today was all about ice baths,” Stalans said. “I tell them to think of it like a spa.”