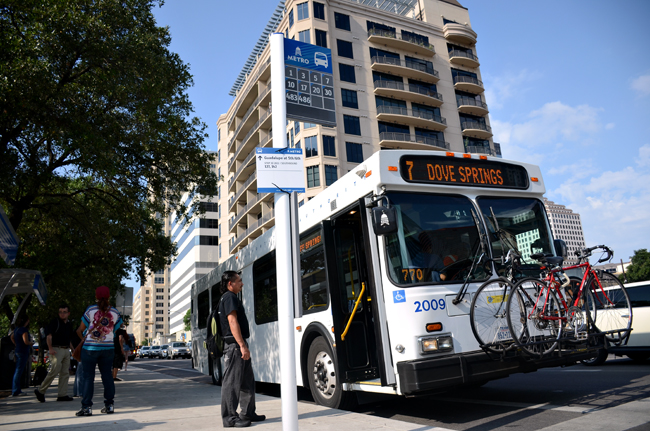 CapMetro now allows its passengers to track all of the entity’s buses in real time.

“The real-time data is enabled by GPS technology, which signals a minute-by-minute countdown at each bus stop for the next three bus departures,” said Melissa Ayala, communications specialist at CapMetro. “The GPS-enabled real-time data will also allow Capital Metro to more accurately track every bus on every route every day.”

“There’s been at least three or four instances where I was on a tight schedule, and a bus did not show up when I thought it would,” Vigants said. “And because I had no way of knowing if it came early or I missed it, I ended up walking to another bus stop.”

Before Feb. 25, only MetroRapid and MetroRail riders could see when their bus or train would arrive based on GPS and real-time data.

Apps such as RideScout and Transit App have already been operating in the Austin area but have now incorporated the new real-time information.

“By making information available openly, CapMetro makes it easier for external developers to build new tools and give riders even more options in their trip planning experience,” Ayala said.

With the real-time data, transportation apps have experienced a boost in popularity.

“We definitely saw a little bit of a spike,” said Jake Sion, director of strategy and business development at Transit App. “We got thousands of people using our app in Austin already. [We have] a lot of people in the 18–25 range. We don’t get precise demographics, but we know there is a huge surge of usage around back-to-school time and a big dip around the holidays.”

Vigants said she plans to stick to the bus system instead of other forms of transportation — especially with the new data and apps available.

“I have been using Lyft this week, but, if it’s somewhere you go regularly, it’s just not economical,” Vigants said.