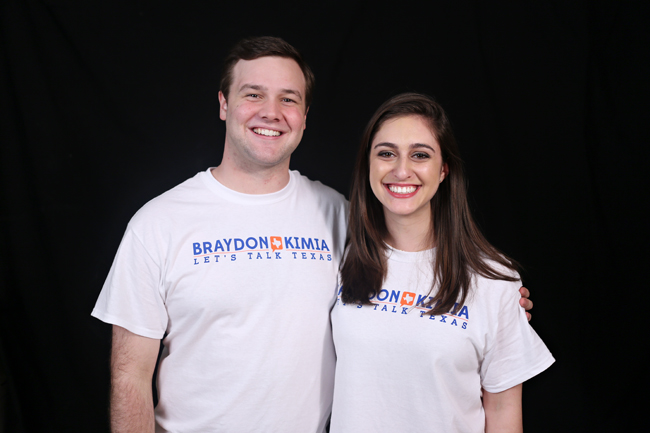 For executive alliance candidates Braydon Jones and Kimia Dargahi, the University of Texas is a passion.

“Kimia and I both love this University so much,” Jones said. “I love the University of Texas so much that I believe it’s a critical year, with a new mayor, new governor, new president, new chancellor — that we need a student who will realize the importance of what a shared governance is.”

Jones said his mother went to Texas A&M University-Texarkana, and went as far as calling the Texas A&M admission office to get Jones to go to school there. He said he toured A&M and knew UT was the right place to be.

“I’ve always wanted to go to the University of Texas,” said Jones, a government senior. “When I got my acceptance letter to UT, my mom picked up the phone and called A&M.”

Dargahi and Jones are considered the front runners of the campaign. They said they are the two with the most Student Government experience, and they currently hold the lead in a Daily Texan online poll with 56 percent of the vote at the time of publication.

“One thing that separates me is my tenacity,” Jones said. “I’ve always been the type of person who will set goals for myself. … I have the experience that allows me to do it. I have extensive involvement in SG.”

Dargahi also said she turned down a full-time job offer for the opportunity to be vice president of SG, but she said it was worth it to be an influence at the institution.

The Alliance is running on a campaign called “Let’s Talk Texas,” which focuses on hearing student opinion first and then determining what the University needs second.

“At the end of the day, our platform is not static,“ Dargahi said. “We just have to take it on a case-by-case basis.”

Jones and Dargahi’s platform points currently include working to strengthen tradition on campus, helping students to “build bridges” for the future and increase social advocacy and safety. Jones said he aims to form a “President’s Round Table,” a place where student presidents can come together and improve communication between organizations.

“The big thing we want to do is listen,” Jones said. “We want to start a conversation, hear what students want and watch their platform become our platform.”

Outside of the campaign, Jones said he is very close to his family and likes spending time with friends and being social.

“I’m not a person who is the lone kind; I never have been,” Jones said. “It’s not abnormal for me to walk up to strangers and say, ‘Hi, can I walk with you? What’s your name?’”

Dargahi is involved in multiple organizations on campus, including the Delta Gamma sorority and Orange Jackets.

Jones said the two work well together, despite their many differences.

“I love the fact that we’re completely different,” Jones said. “She’s more liberal than I am, I’m more conservative than she is. She’s a woman, I’m a man, obviously. She’s way better than I am. Gosh, it sounds like we’re getting engaged or something.”

According to Jones, their relationship is what makes their campaign work.

“We honestly don’t have many things that we share in common, and that’s what’s beautiful about it,” Jones said.

To read the candidate profile for David Maly and Stephen Svatek, click here.

To read the candidate profile for Xavier Rotnofsky and Rohit Mandalapu, click here.