Jurors: Gene Vela not guilty on all counts 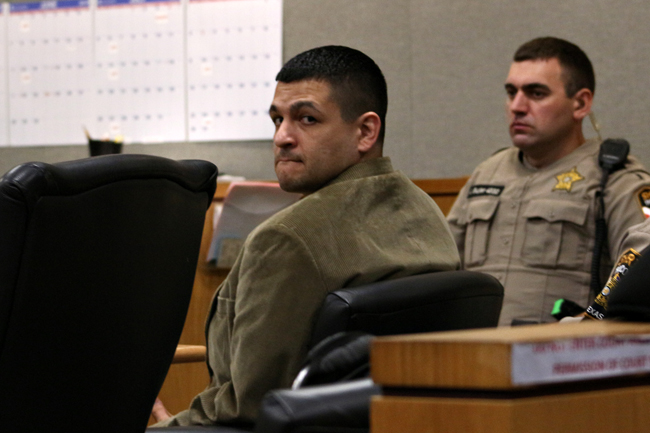 Update (9:14 p.m.): Gene Vela walked out of the Travis County Courthouse a free man after being found not guilty of charges for aggravated assault against a public servant, making a terroristic threat, and unlawful carrying of a weapon.

The trial occurred more than a year after the initial standoff between Vela, a former public affairs graduate student, and Austin Police Department officers outside of Vela’s apartment. The jury reached a verdict of not guilty after four hours of deliberation.

After hearing that her son had been found not guilty of all charges, Karen Emerson, Vela’s mother, said she is happy the nightmare is over. She said the past year has been hard on her and Vela’s family.

“Just even from the beginning, just finding out my son was shot and just having to wait all this time while he’s been in jail,” Emerson said. “It’s not easy for him and it’s not easy for the family for him to lose a year out of his life. I’m very, very grateful that he can resume his life.”

At press time Emerson was waiting for Vela to be processed and released before she could reunite with him.

When the trial began on Feb. 24, Vela’s lawyer, Skip Davis, argued Vela did not know the police were outside his apartment because they failed to identify themselves.

APD officers responded after receiving a welfare concern call from Vela’s friend Andrew Clark, former president of the Senate of College Councils. Clark said he had received a call from Vela after members of the Senate leadership team had left Vela’s apartment following a cook-out and meeting.

When officers got to the apartment, they said Vela answered the door armed with a gun, causing the responders to scatter before being able to talk to him. During the trial, officers said they felt Vela was a threat and thought he was targeting them with a laser.

“The laser did not fit Gene’s pistol,” Davis said. “It fell off the gun when I asked the APD ballistics expert to affix the laser to the gun. It fell off dramatically a second time when I handed the gun back and said ‘try it again.’”

Vela, a former Marine Veteran, suffers from post-traumatic stress disorder and had an emotional episode the night of the standoff, Davis said.

Kiefer Shenk, a finance and sports management senior, worked with Vela on the Senate leadership team and said he hoped the PTSD would be taken seriously during the trial.

“It’s not taken as seriously as it needs to be,” Shenk said. “People, especially those with more severe cases of PTSD, struggle to live a normal life. Paranoia, suspicion and mistrust are hard things to control. These are people that spend their lives fighting for our country, yet our country won’t fight for them.”

Shenk said he had a good time working with Vela in Senate and that Vela always spoke about the campus issues and how to resolve them, but never mentioned his life as a Marine.

“I’m just really relieved he now gets the opportunity to get the help he deserved and needs,” Shenk said. “Whereas if he was found guilty wherever he would have gone for any numbers of years, you’re not treated the same way when you’re incarcerated.”

Original Story: Jurors found Gene Vela not guilty on all counts Wednesday after more than four hours of deliberations.

Vela, accused of engaging Austin police officers in an armed standoff in November 2013, faced charges of unlawful carrying of a weapon, aggravated assault against a public servant and terroristic threat.

Throughout the week-long trial, Vela’s defense lawyer, Skip Davis, sought to prove Vela had not known Austin police officers were at his door the night of the standoff. Davis argued Vela, a Marine veteran, was experiencing a severe episode of post-traumatic stress disorder and believed he was under attack.