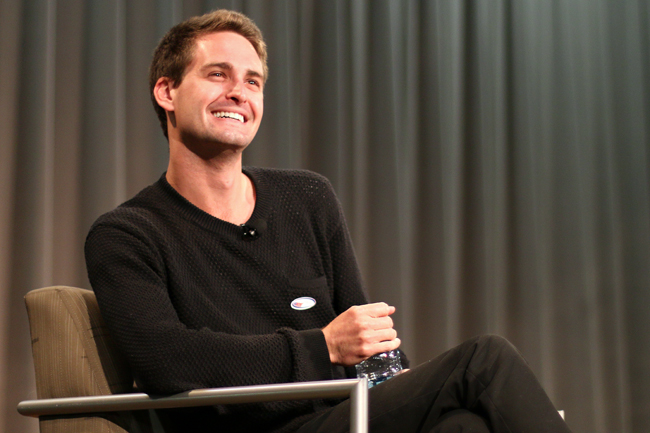 When looking to assemble a team for a startup, Evan Spiegel, co-founder and CEO of Snapchat, found it crucial to find people with a variety of viewpoints who are willing to stand by their convictions.

“When you’re with a ton of really smart people with a ton of different points of view, it’s really important that you believe that you’re correct and fight for your ideas,” Spiegel said in an on-campus talk Tuesday. “Otherwise they sort of get lost in that intensity.”

Snapchat — a communication application valued at $19 billion dollars, according to Bloomberg — is the sixth-most downloaded free app in the iTunes App Store.

Spiegel said his company values hard work, creativity and kindness the most when looking for people to add to their team. Spiegel’s advice for entrepreneurs who want to start a business: Find great mentors and not put off ideas.

One of the most important qualities of an entrepreneur is the ability to listen more than you speak, Spiegel said.

“The way I can tell someone is going to succeed when I meet young people is the guy who is silent in the meeting is always the genius — like, every time,” Spiegel said.

Interested in creating his own startups, computer engineering sophomore Sean Gajjar said Spiegel taught him the first steps to take with a startup and the importance of hiring the right people early on.

The idea of Snapchat is appealing because it is quick and user-friendly yet entertaining, Gajjar said.

“It’s true that social media is becoming a chore — people have to go through a certain process to go and check their Twitter and find out what’s happening,” Gajjar said. “I think our generation looks for things that are kind of ‘snappy.’ We don’t like to wait for things.”

Snapchat’s original concept was simple, according to Spiegel, who said he just wanted an app that could send pictures and make them disappear. Jeff Linwood, lecturer of a mobile app development class, said he hopes Spiegel will inspire students to follow even the simplest of ideas.

“Executing well on simple ideas can lead to amazing opportunities — whether it’s running a billion-dollar company or getting millions of users,” Linwood said. “With simple ideas, you need less time, less money and less effort to convince new users to try your product.”