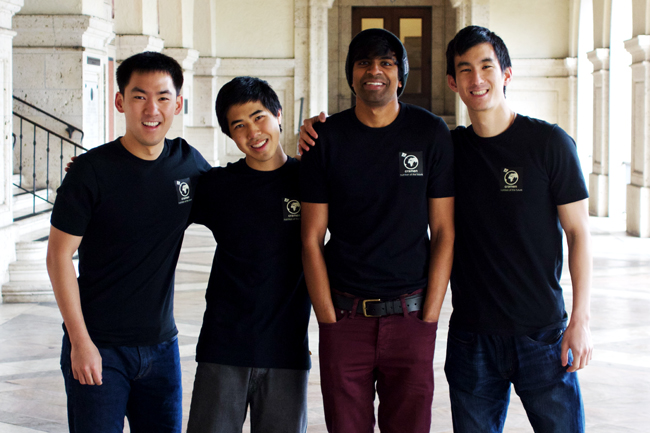 If the four students behind “Cramen” had it their way, everyone would top their dishes with crickets.

Cramen — a portmanteau of cricket and ramen — is a food startup that UT students Michael Chang, Gary Hsu, Vik Parthiban and Kevin Sy founded this past summer.

Cramen specializes in spice packets similar to the ones that come with ramen noodles — but with a nutritional twist. Each packet contains cricket flour and algae powder, both of which are high in protein and nutrients.

Parthiban, an electrical and computer engineering graduate student, said the team’s ultimate goal is to create a spice blend that tastes delicious in a variety of recipes — whether it’s ramen or cookies.

“We want to make sure we have a spice that we can trust,” Parthiban said. “Right now, we want to perfect that spice. Then, we’ll start selling to different customers and see what their reception is.”

The team recently competed as a finalist in the UT Food Lab Challenge in which they had to come up with a food-related idea that could help with a global health issue.

“Something that we all have in common is that we all love ramen,” said Hsu, a management information systems and radio-television-film senior. “So we were thinking about the spice packets, and we said, ‘Why don’t we make these spice blends, so we can add it to anything?’”

With a passion to eliminate world hunger, the team said it hopes to eventually ship the spice packets to third-world locations, such as Africa, India and Thailand.

Chang, a chemical engineering senior, said the inspiration for Cramen came from a 2013 United Nations essay detailing insect protein and nutrition. He said he knew many people used algae powder in foods such as protein shakes, so Cramen incorporated both elements in their spice packets.

“The idea of a ‘spice powder’ is not a very foreign idea,” Chang said. “But conveying the idea that, although this thing may be small and we’re only four students, we have an idea that could change the world. It was challenging to all of us.”

Sy, an electrical engineering senior, said developing Cramen exposed him to how difficult creating a business can be.

Above all, Hsu said anything is possible when a group of dedicated people willingly put in effort and work to accomplish a goal.

“Getting this far proves that you don’t have to have a million dollars, and your last name doesn’t have to be ‘Zuckerberg’ in order to come up with a great idea,” Hsu said. “If you have a group of people willing to put in the time, you can really do something that can change the world.”