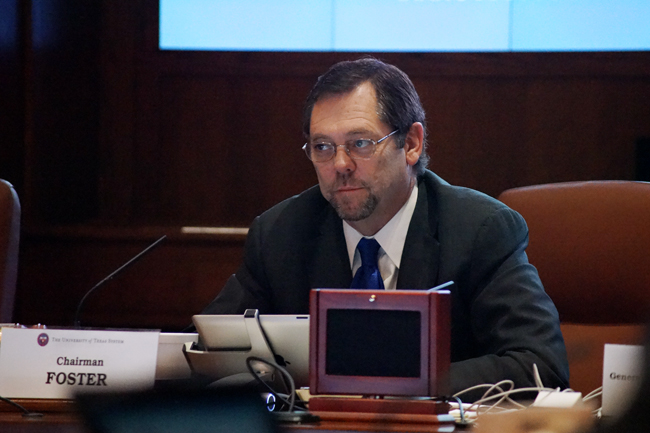 After seven hours in a closed-door session Wednesday, the UT System Board of Regents declined to name a president or announce the names of the finalists for the UT presidency.

According to a UT System press release, the Board “must vote to name one or more finalists and then must wait 21 days before making an official appointment.”

Following the meeting Wednesday, UT System Chairman Paul Foster spoke about the leaked information regarding the candidates for the presidency. An unknown source close to the University leaked the identities of the three candidates in late February, although Foster could not confirm the leaked identities.

The source named Greg Fenves, executive vice president and provost of UT, David Daniel, president of UT-Dallas, and Andrew Hamilton, vice chancellor of the University of Oxford in England, as candidates.

“I’m as frustrated as anybody whenever there are leaks,” Foster said. “The search committee was a broad cross section of a lot of different people, and I don’t know where the leaks came from. I certainly don’t want to point fingers at anybody; I wouldn’t even know who to point my finger at.”

Foster said despite the hushed nature, the presidential search included input from large stakeholder groups. He said even though having a large group means leaks are harder to prevent, the additional input is worth the risk.

“I think the process is a good one. I think the students, faculty, staff, they all have to be included,” Foster said. “Alumni [and] all constituencies need to be included in the process. One of the risks [is], the bigger a group gets, the more likely you are to have a leak, and that’s just something we have to deal with.”

Foster said candidates were warned that their identities could be leaked because of the high number of people involved in the search process.

Biomedical engineering senior Anuj Kudva, a member of the presidential search committee, said he felt the search was effective but that students could always benefit from more input.

“I think they handled it really well, but there could always be more student input, but I also understand where they’re coming from in terms of why they didn’t do a town hall,” Kudva said.

In the press release, UT System Chancellor William McRaven said he is happy with the outcome of the search committee’s recommendations.

“This is one of the most important decisions the Board will ever make, and it will have a tremendous impact not only on UT-Austin, but on the UT System and entire state of Texas. Therefore, I think it is in the best interest of the University for the Board and me to take a little time for consideration,” McRaven said. “And, after what we learned today from each of the candidates, I can say with great confidence that UT-Austin will be firmly poised to accelerate its strong trajectory toward preeminence.”