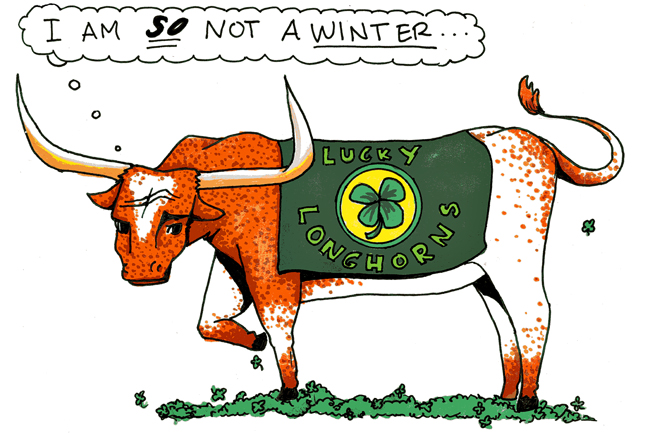 The University Co-op is stocked with green Longhorn shirts, caps and mugs to ensure students don’t get pinched on St. Patrick’s Day, but a good portion of the merchandise will end up on the clearance rack after the holiday ends.

While Jeff Halliburton, vice president of operations for the University Co-op, said there is sufficient demand for holiday-themed UT apparel, students around campus disagree.

“You’d be surprised. We sell hundreds and hundreds of pieces across the different St. Patrick’s Day styles,” Halliburton said. “We have pretty decent demand this year, especially with
the head wear.”

Stephanie Del Paggio, a Plan II and marketing junior, said many of her friends shop at the Co-op a few times a year for clothes or souvenirs for family members, but that’s about it.

“A lot of my friends shop online, where it’s cheaper, or get free shirts from fairs on campus,” Del Paggio said.

Incoming students, family members, alumni and tourists are most likely to shop at the Co-op, according to radio-television-film freshman Amanda Booth.

“Beyond these groups, I think students use the Co-op for convenience or gifts,” Booth said. “Most students buy clothes from organizations they join.”

The Co-op sells thousands  of pieces of merchandise a year for many holidays, including Halloween, Christmas and Independence Day, according to Halliburton.

“We like to get behind every holiday,” Halliburton said.

“College students don’t have the money to blow on temporary things,” Haile said.

While some of the green gear will still likely end up on clearance, most merchandise for other holidays does get sold, according to Halliburton.

“Traditionally, after markdown, almost everything is sold,” Halliburton said. “Then we’ll make donations [if need be].”

“Money is tight. Nobody will spend that much money on UT clothes for a specific event.” Alvarado said.