Texas looks to fix lack of discipline against Stanford 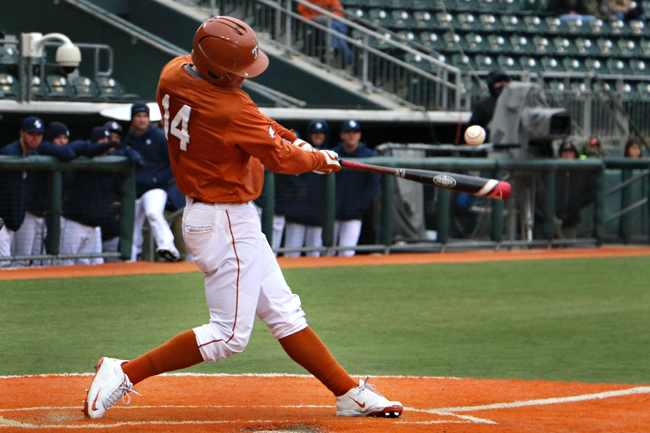 After two losses in a doubleheader Sunday, head coach Augie Garrido had a brief explanation for what happened.

“I think we played with a lack of discipline,” Garrido said.

In the two games against San Diego, the No. 13 Longhorns managed to go 0-for-11 with runners in scoring position and scored only two runs, both of which came on sacrifice flies.

In the field, Texas committed two errors, both of which led to big innings for the Toreros.

“To be consistent, it takes discipline and it takes confidence,” Garrido said. “And, for me, that’s what was missing.”

The Longhorns look to turn it around in time for a four-game series beginning Thursday against a formidable Stanford team.

Until the setback on Sunday, the Longhorns’ season was off to a good start, with a split against Rice in the opening weekend and a four-game sweep against Minnesota last weekend.

“It humbles you when you come out and don’t play so well, especially at home,” senior pitcher Parker French said.

But fixing what Garrido called “a common problem” won’t be easy.

“First of all, you have to make them aware of it,” Garrido said. “Secondly, you have to put them in situations in practice, force them to practice at a level that is highly competitive and get them to perform in an environment that you create that simulates as accurately as you can to a game.”

However, correcting the problem in practice and not making the same mistake again in a game are two separate things, especially against Stanford.

The Cardinal comes into the weekend series unranked in the NCBWA poll, although they managed to take two of its four games against No. 15 Rice in Palo Alto, California, this weekend. They also won two of their three games at perennial powerhouse Cal State Fullerton the weekend before.

Additionally, all of Stanford’s starting pitchers, most of whom are sophomores, returned this season.

“They’re a physical team,” junior outfielder Ben Johnson said. “[Their pitchers] are going to have a year under their belt. They’re going to be really experienced.”

But even with the stiff competition ahead of the Longhorns this weekend, they are confident they will find a way to overcome the losses from this past weekend.