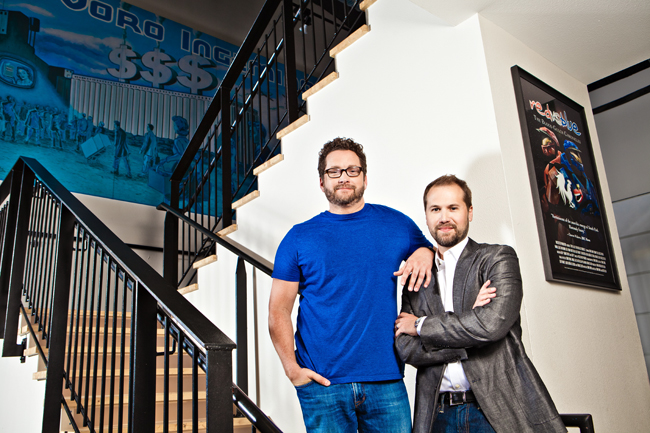 Hilarious dialogue, fast-paced action and great animation are trademarks of Austin production company Rooster Teeth. The next project on the company’s list: a crowd-funded science-fiction comedy.

“Sci-fi, comedy and action has always been the heart and soul of what we do at Rooster Teeth,” Hullum said. “We thought it would be fun to do something similar [to Red vs. Blue] but in live-action.”

The film follows the story of extraterrestrial beings who make contact with the U.S. government. After discovering a race of evil aliens preparing to invade Earth, the government commissions a power suit set meant for a Champion of Earth to wield. Unfortunately for the people of Earth, the suit accidently falls into the hands of four local idiots, who band together as heroes to protect the planet.

Rooster Teeth produced “Lazer Team” with a budget of $2.5 million mostly crowd-funded through an Indiegogo campaign. The film is the most funded campaign on the site to date. Rooster Teeth intern Mackenzie McMahon, a radio-television-film freshman, said some fans donated as much as $10,000 toward the movie. Those who donated significant amounts received special perks, including an executive producer title and a small role in the film.

“[Rooster Teeth has] such huge fan support,” McMahon said, “It was completely amazing just to see how much the fans were willing to contribute and how they blew away their Indiegogo goal.”

Hullum said he made sure every penny earned from the campaign benefited the film. According to the film’s Indiegogo page, nearly 17 percent of the money raised went directly toward producing high-end special effects.

“We wanted to make every dollar count toward the production value,” Hullum said. “[We wanted to] make it look and feel like a big cinematic experience.”

Biology junior Michael Li, an extra in “Lazer Team,” said he was excited to work with Rooster Teeth. He said the company’s distinct movies are what attract audiences.

“Rooster Teeth has its own unique flavor as far as comedic talent and storytelling goes,” Li said. “It’s one that resonates with a lot of the community.”

Li said that the crowd-funding campaign allowed the creators to make what they envisioned without dealing with overbearing, outside forces.

“Without a producer looming over their head, they had a lot more creative control over their own project,” Li said. “I look forward to seeing the live-action Rooster Teeth vision.”

Hullum said that “Lazer Team,” like all of the content Rooster Teeth produces, couldn’t have happened without the support of the company’s fans. He aims to attract current Rooster Teeth fans and the general moviegoer population once the movie is released, sometime in the next year. The full trailer premieres March 16 during SXSW.

“It’s going to be like Rooster Team content in terms of talent and humor,” Hullum said. “We’re definitely taking it up several notches in terms of production value and the big, sweeping epic of it all.”