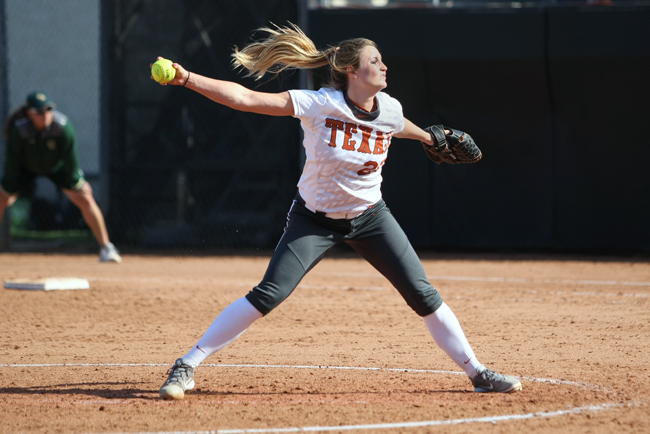 In its fifth and final tournament before the conference season begins, Texas (13–7) will travel to Chapel Hill, North Carolina, to compete in the Carolina Classic.

Although the team was originally scheduled to start the tournament against North Carolina on Thursday, the Longhorns never took the field because of inclement weather.

As a team, the Longhorns are coming off a 4–0 performance in the Texas Invitational. Their success comes from a combination of offense and defense. Texas’ leadoff batters, known for setting the tone early, reach the bases over 40 percent of the time — while from the circle, freshman Erica Wright has pitched up to her hype with a 5–3 record, three solo shutouts, six complete games and an impressive 1.54 ERA.

Texas, ranked No. 25 last week, dropped out of the rankings this week.

With three games remaining in the tournament, weather permitting, the Longhorns face Ohio at 11 a.m. Friday.

So far, the Bobcats (4–9) have struggled to find a consistent positive rhythm — the team is currently on a five-game losing streak, though select Ohio players have stepped up to the plate. Junior outfielder Sloan Walker, who has played in all 13 games this season, has displayed a stellar batting performance, hitting .404 with nine runs on the season. Although she’s only played in four games so far, freshman outfielder Michaela Dorsey records a team-best .429 batting average for the Bobcats. Three other players join Sloan and Walker in hitting over .300 for the team.

The last and only meeting between the Longhorns and the Bobcats, five years ago, ended in an 11–5 Longhorns’ victory. In the remaining two games of the tournament, Texas will play North Carolina on Friday and Charlotte on Saturday.

North Carolina (11–4) started the season on a positive note, and the Tar Heels’ freshmen do the most work to carry the team. Freshman infielder Taylor Wike is batting .432 with four doubles and two triples and freshman pitcher Kaylee Carlson maintains a 2.58 ERA with a 6–2 record and 37 strikeouts. Junior outfielder Aquilla Mateen also hits .429 and has started in all of the team’s games this year. The Longhorns last played the Tar Heels in 2014, defeating them 7–3.

Texas will meet Charlotte for the first time in program history Saturday. Charlotte (8–6) is 2–2 on a neutral site this year and provides a balanced batting lineup. Four players hit over .300, and the 49ers have outscored their opponents 73–41.