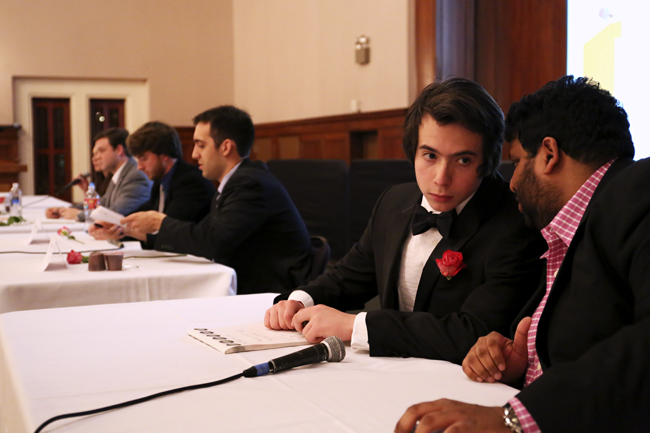 Welcome to The Daily Texan's election night live blog. Throughout the night, we will provide updates on the campus-wide Student Government elections. To learn more about the candidates, check out Student Elections Explorer.

7:30 p.m. – Because no one ticket captured more than 50 percent of the vote, there will be a runoff election for Executive Alliance between Rotnofsky-Mandalapu and Jones-Dargahi. Jones-Dargahi received 46.34 percent of the vote and Rotnofsky-Mandalapu received 26.9 percent. The other two executive alliances on the ballot, Maly-Svatek and Morrison-Normyle, received a total of 26.76 percent.

Jones-Dargahi and Rotnofsky-Mandalapu will campaign for six more days before the runoff election March 11-12. Each team will be allowed to spend an additional $150 on campaigning.

Jones said he is optimistic about his team's odds for the runoff election.

"Our numbers looked great the first time," Jones said. "We're going to do exactly what we've been doing."

Election Supervisory Board Chair Nick Molina said it was difficult to predict the results of the Executive Alliance race.

"I wouldn’t necessarily say its a surprise," Molina said. "[Both teams have] been campaigning so well."

7:01 p.m – Election Supervisory Board Chair Nick Molina said 9,801 people voted in the campus-wide elections this year, an increase of 14 percent from last year.

"I want to thank all 74 of the candidates who ran in the campus-wide elections this year," Molina said.

6:55 p.m. – With five minutes until elections results are announced, Jones said if he wins, he will talk to the other Executive Alliance teams to discuss their platforms. Rotnofsky said if his team wins, he will demand a recount. Maly said he and Svatek will work to accomplish every goal on their platform.

6:28 p.m. – The Election Supervisory Board arrives and directed bystanders to take seats at the front of the room. Supporters of Braydon Jones and Kimia Dargahi are chanting fellow Executive Alliance team David Maly and Stephen Svatek's slogan, "SG for all."

"I'm a little bit excited, but more nervous … it's after 5, so we did what we could," Helgren said.

6:20 p.m. – With 10 minutes until election results are released, students and candidates are waiting outside the Legislative Assembly Room in the Student Activity Center. Doors are set to open at 6:30 p.m.