Peace Corps works to increase volunteers after decline in applicants 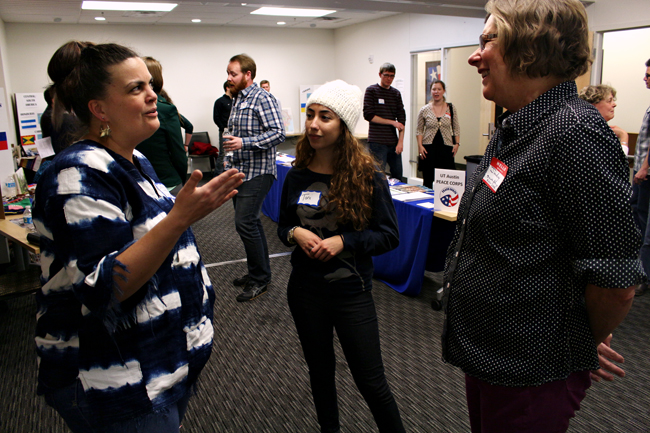 The University’s Peace Corps organization is working to increase the number of volunteers it recruits after seeing a decrease in volunteers over the past year.

During an open house in the International Office on Nueces Street on Thursday, volunteers who have returned from service discussed their experiences abroad and spoke about what the organization is doing to attract more applicants.

The Peace Corps is a government-run volunteer program in which volunteers serve a two-year commitment to improve the social, economic or health conditions in other countries. Each year, thousands of college students and alumni from across the country volunteer.

Scott Stanford, a former urban planning graduate student who worked to provide better water quality and access to communities in Nepal from 1992–1994, said some prospective volunteers may be discouraged from applying because of tough conditions volunteers face.

“Unfortunately, during the projects, the water lines would get contaminated,” Stanford said. “We had to deal with dysentery, giardia, and I even got worms at one point. In that situation, you just have to take what medication you have and keep going.”

In 2012, 61 undergraduate alumni volunteers served abroad through the Peace Corps, according to a survey from the Peace Corps. The University produced 47 volunteers in 2013, a year in which the number of Peace Corps volunteers decreased across the board among universities.

Judy Schneringer, who served in South Africa from 2006–2008, said she thinks simplifying the application process and giving volunteers the option of choosing where to serve will help the Peace Corps recruit more volunteers.

“At the time when I was applying, we did not get our first choice of location,” Schneringer said.  “By having the option to choose where to serve and a shorter process can help Peace Corps.”

Omar Gamboa, Latin American studies senior, said he is still assessing what role he could serve in the Peace Corps.

“I would be interested in looking into being an English teacher, but I do not know if teaching literature is a demand in countries,” Gamboa said. “Right now I am trying to see if that is possible and see other ways I can serve in the organization.”