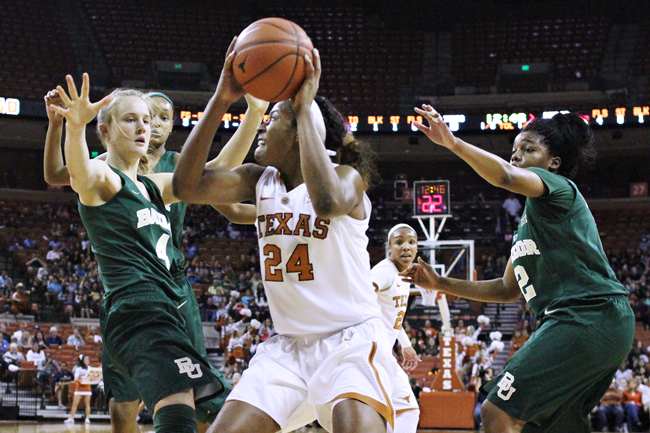 DALLAS — An outranked Texas struggled in the first minutes of its Big 12 Championship opener as TCU gained a 5-point lead, but the team quickly it found its rhythm.

The game was tied for just 29 seconds and the rest was all the Longhorns, as they captured a 67–61 victory in the quarterfinal matchup with the Horned Frogs in the American Airlines Arena on Saturday night.

After struggling, Texas eventually found plenty of energy despite it being stricken with injuries throughout much of the regular season. The Longhorns, who led for 35 minutes of the game, played with the same demeanor that led them to a 13–0 start in the regular season. By halftime, Texas held a 14-point lead, and early in the second half, it had its largest lead of the night — 18 points ahead of the Horned Frogs.

But with four minutes remaining in the game, TCU started to heat up from outside, making four 3-pointers to pull within 6 of Texas.

With 6:26 remaining, both junior guard Empress Davenport and junior center Imani McGee-Stafford sat with already nine rebounds a piece for Texas, which helped the Longhorns around the basket. Davenport tallied several key points in the remaining minutes, including three shots from the charity stripe, which helped extend Texas' lead.

“Her decision making is pretty good,” Aston said. “There’s no question about that.”

"I think we finally found our sense of urgency,” Lang said. “Now we just know; when you lose, you’re out.”

The Longhorns will face Oklahoma, which defeated West Virginia in the quarterfinals, at 4 p.m. Sunday.