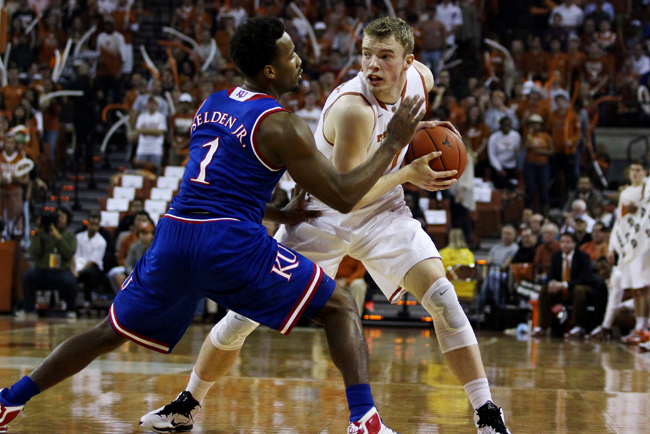 In a span of 82 seconds late in the second half Saturday, senior forward Jonathan Holmes nailed a pair of 3-pointers on back-to-back possessions and sophomore guard Kendal Yancy found junior center Cam Ridley in transition for an and-1, alley-oop dunk.

The rapid 9–2 run stretched the Longhorns’ 2-point lead to 9 with under seven minutes remaining in the game to help guide the Longhorns to a much-needed 62–49 victory over Kansas State.

The impressive run was big for Holmes, who entered the game mired in one of the worst slumps of his career. He hadn’t scored more than 7 points in any of his previous seven games, connecting on just 10-of-42 shots over that stretch.

But in what was Senior Day at the Frank Erwin Center, Texas’ lone scholarship senior came up huge.

“It was great for him,” head coach Rick Barnes said.

Holmes finished the game with 10 points, two rebounds and a career-high four blocks. His 3-pointers earned loud cheers from the fans, and by the end of the Longhorns’ 82-second rally, the Erwin Center was louder than it had been all season long.

“That was a lot of fun,” Holmes said. “It’s pretty much all you can ask for your last game here. My teammates really picked up their game, and it made me really pick up my game. I love those guys for that.”

Before Holmes’ late outburst, Texas frontline’s defense kept the Longhorns in the game. Texas tied a school record with 14 blocks in the game, and it essentially took away the Wildcats’ ability to score in the paint for most of the first half.

The Wildcats missed 17 shots in the first half. 10 of those were blocked. In addition to Holmes’ four blocks, Ridley and junior center Prince Ibeh each added three.

With the victory, the Longhorns improved to 19–12 on the season and 8–10 in conference play. They enter next week’s Big 12 tournament in Kansas City, Missouri, on the bubble for a spot in the NCAA tournament. After two consecutive victories to end the regular season, they are in much better shape than they were a week ago.

Texas now has the chance to improve its résumé even further at the conference tournament, in which it will take on Texas Tech in the first round Wednesday. Barnes chose not to speculate on whether his team has done enough to earn a spot in the Big Dance.

“Are we good enough to be [in]? Absolutely,” Barnes said. “We still got games out in front of us. If we’ve done enough to be in it, we’ll be in it.”

“Right now, everybody’s feeling good about the last two games,” junior guard Demarcus Holland said. “We feel like everybody’s coming along. We still trust the system, and we still believe that we can win and play in the tournament.”