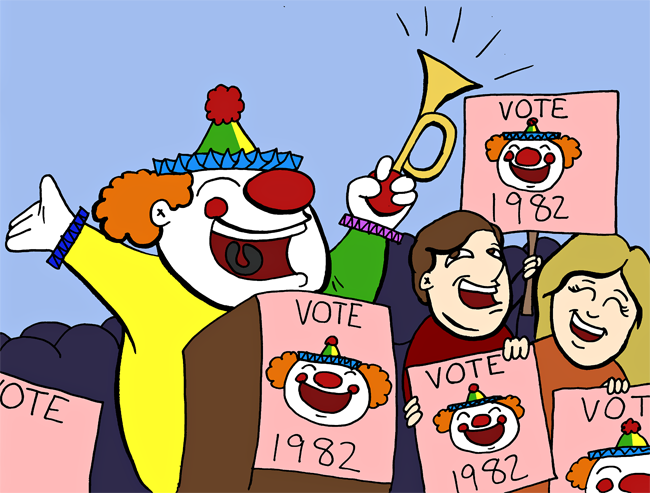 Executive Alliance running mates Xavier Rotnofsky and Rohit Mandalapu are the first Texas Travesty candidates to participate in a runoff election —  but they are not the first humor campaign to pull a significant percentage of the votes.

In 1982, a satirical campaign won the Student Government election with 3,013 votes — attracting more votes than the second and third place candidates combined. The punchline: The winning candidate, Hank the Hallucination, was a fictional character in The Daily Texan cartoon “Eyebeam” by Sam Hurt.

Hank “announced” his presidential candidacy through an Oct. 19, 1982, cartoon strip in The Daily Texan and he quickly gained a following. In the first week of campaigning, over a thousand students signed a referendum so that Hank’s write-in votes would be counted and announced with the rest of the candidates’ results.

Steve Patterson, UT’s current men’s athletic director, was Hank’s campaign manager and referred to him as a “dream candidate.”

“He’s the perfect candidate for the illusion of student government,” Patterson said in an Oct. 27, 1982, article in The Daily Texan. “He’s vague on the issues. You can see right through his bullshit – and practically everything else.”

As election season went on, the University Election Commission said Hank could not officially run for the Students’ Association, UT’s newly reinstated student government organization, because he was not a human candidate. Regardless, Hank continued to campaign on the pages of The Daily Texan’s comics section. Students also held a “Hank for President” rally, dubbed “Hankstock.”

On election day, Hank beat out the other candidates in a race with “an unusually high voter turnout,” according to a Nov. 11, 1982, article from the Texan. Because Hank was fictional, the next highest-polling candidates, Paul Begala and Pat Duval, went into a runoff election.

“We are very pleased with Hank’s victory,” Hank campaign worker David Weber said in the Nov. 11 article. “He’s gratified, and wants to make all University students extremely happy, assuming he won’t have to take up arms to gain his rightful office.”

Begala, the winner of the runoff election, would eventually experience political success as one of the central campaign advisers for Bill Clinton’s 1992 presidential campaign. Today, Begala is a political commentator for CNN.

“I’m not one to make a broad philosophical statement on a joke, and that’s how [Hank’s victory] ought to be taken — as a joke,” Begala said in the article.

Joke campaigns have evolved since then – since 2009, most election seasons have featured a ticket backed by staffers from UT’s satirical publication Texas Travesty. Aaron Walther and Lara Grant, the Travesty’s 2010 candidates, posed as Soviet dictators with the aim of striking fear into the hearts of students. In 2011, David McQuary and Hannah Oley ran as two time travelers who were coming back from the future to save humanity. The two urged students not to vote for the front-running candidate, who they said would cause Austin to turn into a nuclear wasteland.

Until Rotnofsky and Mandalapu’s campaign this year, no Travesty candidates had ever earned higher than 12 percent. Rotnofsky and Mandalapu became the highest-polling Travesty candidates in history when they garnered 26.9 percent of the votes in Thursday’s Executive Alliance election. Braydon Jones and Kimia Dargahi, the executive alliance team that placed highest, received 46.34 percent of the votes.

Voting for the Executive Alliance runoff will take place Wednesday through Thursday, and results will be announced at 6:30 p.m. on the Main Mall in front of the UT Tower.