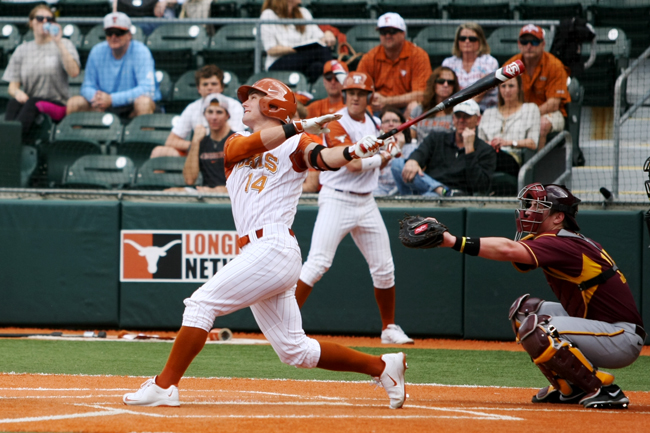 Led by junior left fielder Ben Johnson, No. 12 Texas secured a 12–4 win and a series split against Stanford (9–8) on Sunday afternoon in Palo Alto, California.

Johnson hit a perfect 5-for-5 and finished the game with two RBIs.

“Ben has worked really hard at his game. … He’s worked very hard in the weight room,” head coach Augie Garrido said. “I think this is really leading towards a level of confidence … that feeling of confidence he has, it’s almost magical. He got five [base hits] today, which is a pretty good season for a lot of people.”

The Longhorns (10–6) got off to a hot start in the first inning, scoring five runs. Johnson led off the first with a single to center field. After Johnson’s leadoff single, Stanford was able to get two outs, but Texas answered with four straight walks to score two runs.

Redshirt junior designated hitter Taylor Stell smacked a two-run single to extend the Longhorns’ lead to 4–0. The Longhorns capped off the inning with an additional run to push the lead to 5–0.

Texas continued its offensive explosion in the second inning. Sophomore catcher Tres Barrera ripped a ball past the left-field fence for a two-run home run to put the Longhorns up 7–0.

Stanford tried to fight its way back into the game, scoring two runs in the third and sixth innings. The Cardinal got the game to within three, but Texas quelled the Cardinal comeback in the seventh inning with a pair of RBI singles from Johnson and senior right fielder Collin Shaw.

In the ninth inning, sophomore center fielder Zane Gurwitz hit a two-run home run to push the Longhorns’ lead to 11–4. Johnson followed Gurwitz’s homer with a triple and scored on Shaw’s single.

Stanford couldn’t find a way to score in the bottom frame and Longhorns finished the game with a 12–4 win.

While the offense was on display Sunday, sophomore starting pitcher Josh Sawyer (2–2) had a solid outing, allowing two runs on four hits.

“[Sawyer’s] improved each time he’s been out there,” Garrido said. “He’s got a little perfectionist in him, which is part of what makes him good. He practices right, takes his bullpens and really works at them game-like. He’s an up-and-coming star pitcher for us.”

After dropping the first two games of a four-game series, splitting the series was important for the team’s RPI, Garrido said.

“If you split 50-50, you’re coming out of it with a pretty good score,” Garrido said. “But if you go three losses and one win, it really adds up in the wrong way quickly.”