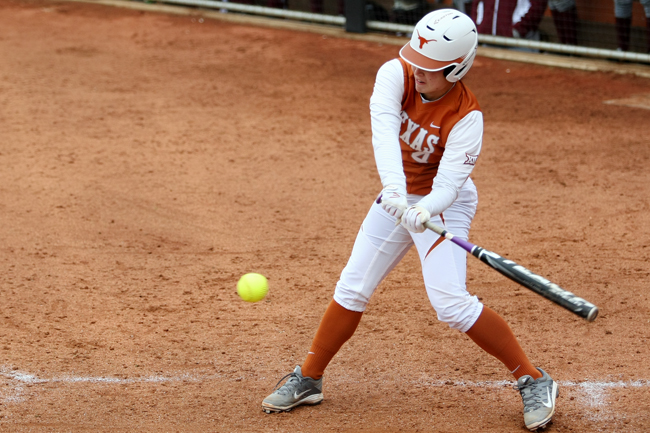 The first day of play in North Carolina was cancelled because of weather, but storm clouds couldn’t stop the big bats in Texas’ lineup.

The Longhorns (15–8) collected 30 hits and scored 19 runs through three games at the Carolina Classic, and overall went 2–1 on the weekend.

On Friday afternoon, the Longhorns dropped a late game to North Carolina, 8–3, despite outhitting the Tarheels.

Texas had eight hits in the game, led by sophomore left fielder Stephanie Wong, who went 2-for-3, and sophomore first baseman Kelli Hanzel, who also went 2-for-3 with two runs scored.

Five runs on 10 hits powered the Longhorns to a 5–0 victory over Charlotte on Saturday morning. The Texas offense was led by Davis, who had two RBIs, and juniors Lindsey Stephens and Stephanie Ceo, who both went 2-for-3 with a combined three runs.

Wright was the highlight of Saturday’s win, tallying a career-high 11 strikeouts with just two hits allowed over six innings of work. Wright gave up four walks in the game, but she was able to adjust and keep baserunners from crossing the plate.

The small downside to Wright’s strong line exemplifies the inconsistency the Texas pitching staff has struggled with throughout the five tournaments to open its season. The staff has a collective 2.82 earned run average and has granted 83 runs in 23 games.

The Longhorns will travel to Fayetteville, Arkansas, this weekend for a three-game set with the Razorbacks. Only five games separate Texas from its first Big 12 series against Kansas at the end of the month.