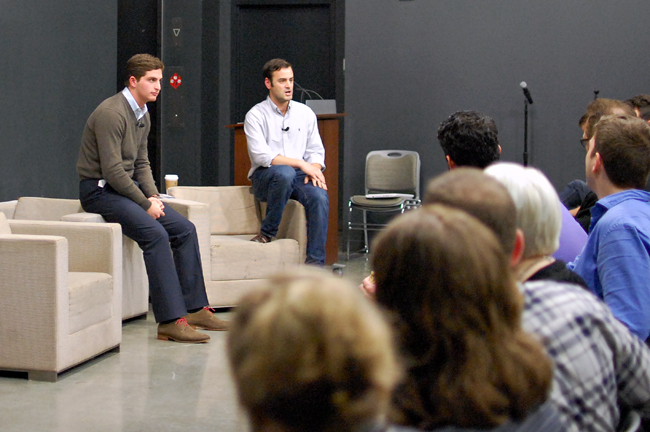 The most important part of creating a startup is avoiding fear of failure, according to two panelists who founded their own companies.

Zach Dell, founder of the dating app “Thread,” and Bob LiVolsi, founder of the e-book retailer “BooksOnBoard,” spoke as part of UT Entrepreneurship Week — a series of lectures designed to encourage students to develop their own businesses — about the challenges of building startups.

Students have an advantage when launching a startup company in Austin because of the resources the city provides, Dell, who is a high school student entrepreneur, said.

Psychology senior Jason Brown, who pitched his startup “Carenexions” at the event, said he discovered a strong support network at UT when he found a board of advisors to help him develop his business.

“Honestly, just not being afraid to share your idea and put yourself out there really helped,” Brown said.

There is a surplus of business ideas in Austin, but the biggest factor that goes into selecting the right idea is positive feedback from customers about a product, according to LiVolsi.

“Validate, validate and revalidate,” LiVolsi said. “You have to keep going back on yourself as you are working through your business model and revalidating. The challenge is doing it as quickly as possible.”

It is tough building a startup without proper financial support, Dell said, and customer validation is an important tool in gaining investors.

“When you have an idea, quickly build it a website, and send it out there,” Dell said, “If enough people sign up for a wait-list to get the product, you won’t struggle to get funding.”

Failure is a key part of the process of reaching success, according to LiVolsi.

“Failure is not something that you want to have happen, but it happens, and it’s part of your growth.” LiVolsi said. “You gotta keep going, and you gotta plow through.”