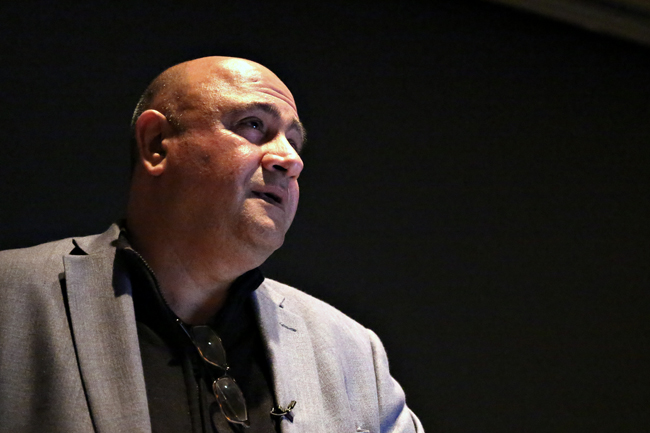 Erez Biton used his literary talents to invent a type of language through poetry that had been previously non-existent in Israeli society, according to a visiting Israeli professor from New York.

Prior to Biton’s poetry, Hebrew literature primarily dealt with the motives of Jewish life in Europe, according to Sami Shalom Chetrit, a renowned Moroccan-Israeli poet and professor, who spoke Monday at the Avaya auditorium.

“[Biton] writes about this singer in the court of the king of Morocco, [which] was new and never done before,” Chetrit said. “The essence of his poetry is that he was searching.”

One of the most inspiring aspects of Biton’s story, according to Cherit, was his ability to use his experiences as a blind man to approach poetry in his own way.

Briton became blind at a young age when he lost his sight in an accident with a hand grenade.

“We went walking around. And that’s when we found that bomb, that hand grenade,” Biton said. “I was so convinced that it was a treasure that I wanted to open it myself. I took it one hand and hit it with a hammer, and it exploded.”

In a documentary produced by Chetrit about the poet’s life, Biton said his disability allowed him to relate to other individuals in unfortunate circumstances. This contributed to his active role with the Israeli Black Panthers, a prominent socialist organization in the 1970s.

“[When] all the panthers were enlisted into the war, I found myself completely alone,” Biton said in the documentary. “That’s when I started producing poetry.”

Biton spent a period of his life in Morocco and was motivated by the societal injustices he saw to create revolutionary poetry. Chetrit said he created the documentary in order to spread Biton’s story to those who hadn’t heard it.

“A while ago, Chetrit was the person that, for my generation, revealed another Israeli society,” Sternfeld said.

The descriptive imagery found in Biton’s poetry allows the art to transcend language barriers and be consumed by people of all backgrounds, according to Chetrit.

“It’s a unique way to describe the world in so many colors, sounds and images,” Cherit said. “He sees so many things much better than us.”