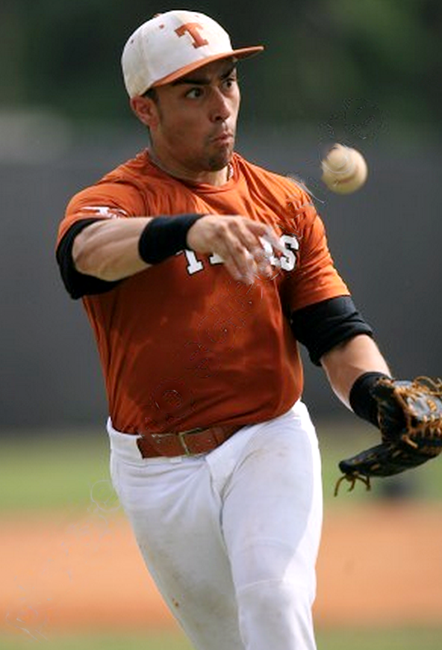 Chemical engineering senior GJ Sequeira had offers to be a preferred walk-on at Vanderbilt or Rice, but he decided to come to Texas with hopes of playing at Disch-Faulk Field. When those plans fell through, he found his way onto Texas’ club baseball team, and he is making quite the impact.

During his freshman year, Sequeira did not make the varsity squad under head coach Augie Garrido. He then failed to make the club team.

Sequeira still wanted to play ball, though, so he started playing in a fast-pitch adult baseball league and intramural softball.

“I kind of used that as incentive,” Sequeira said. “If they didn’t want me, then I was going to work as hard — if not harder — to [make sure] I’m always improving.”

Sequeira still did not play for the collegiate or club baseball teams during his sophomore year either, but he continued to train. He worked with Jason Kanzler, then-Minnesota Twins minor leaguer, Genesis Fitness and Performance in Houston as well as other high school and college players with similar aspirations.

A year later, as a junior, Sequeira finally made a team — becoming part of the 25-man club team.

He wasn’t satisfied just making the team; he wanted to be a contributor. Sequeira spent extra time in the batting cage and consistently studied videos of his swings and throwing motions to determine how he could improve.

“He’s got one of the best work ethics of anyone I’ve ever played with,” team president Blake Sandall said. “He’s always at practice and will regularly stay late to hit on his own.”

Sequeira worked his way into the starting lineup, becoming the definition of a utility player. He found himself at seven different positions, only failing to make an appearance at catcher and first base.

With Texas on the brink of missing out on regionals in a close game with A&M last season, Sequeira drove a two-strike curveball up the middle for the game-winning run, keeping the group’s run alive. The club team ultimately advanced to the National Club Baseball Association World Series over the summer — but only for a short stay.

Texas was eliminated in two games, and Sequeira could only watch from during the second match because of full-body cramps.

“It was disappointing because I couldn’t help my team physically,” Sequeira said. “But, I used that as incentive to train harder and make sure that anything like that doesn’t
happen again.”

During the offseason, Sequeira did various aerobic trainings to get rid of lactic acid in order to ensure he wouldn’t get cramps again. Many of his teammates have noticed, commenting on his added speed and strength.

“He does everything the right way,” freshman pitcher Connor Kraus said. “From warm-ups to practice, he takes everything seriously, and
it shows.”

The extra work is paying dividends for him and Texas this season thus far. Sequeira has evolved into a senior leader and boasts a .375 batting average and a .444 on-base percentage in league play. Beyond his personal improvements, Sequeira has helped the team earn a 6–1 league record and tie for first place with Texas A&M in the Gulf Coast League South Division. The club team is staring another World Series appearance directly in the eyes.

“I had to prove myself every step of the way,” Sequeira said. “Every opportunity I got, I had to make sure that I made the most out of it. I try to make that a point to the new players coming in. Whatever position or situation you come in, do your best to perform in it.”