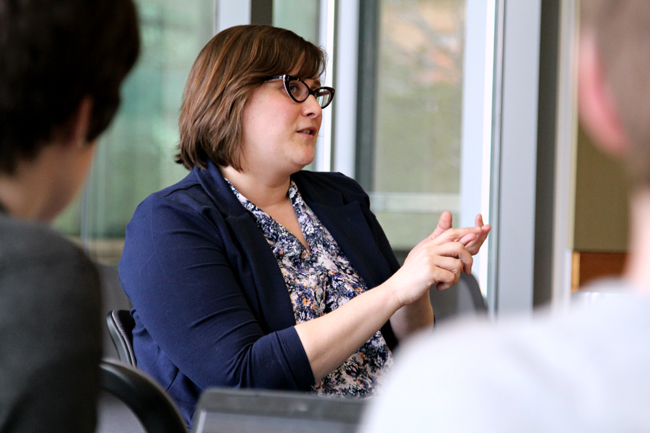 Gay and lesbian teachers face challenges that their heterosexual colleagues do not, according to a visiting professor from Boston University.

Catherine Connell, researcher and sociology assistant professor, spoke Tuesday about the professional struggles of gay teachers in California and Texas and how those educators balance their sexual identities in the context of the professional expectations of their careers.

“Gay and lesbian public school teachers negotiate two demands — they are expected to present a sexually neutral identity in the classroom, but the movement for gay pride calls for them to be open about who they are,” Connell said.

Connell said student age and teachers’ gender and race also make a difference in how students interact with them.

“I found that it was particularly difficult for gay and lesbian teachers of color because they faced added discrimination,” Connell said.

Kendall Gerdes, rhetoric and writing assistant instructor and a self-identified “butch lesbian,” said her gender identity is often perceived as more masculine because she wears clothing typically associated with men.

“My gender … comes with some privileges usually given to men, such as respect and authority,” Gerdes said.

There are several Texas counties that protect gay and lesbian teachers from discrimination in the work place, but the majority do not have ordinances that include sexual orientation under their list of protections, Connell said.

While the legal context of laws and restriction matters, the culture and receptiveness of each school is also important, according to Connell.

Gerdes said coming out can be challenging for students or teachers, but it can be helpful for other LGBT students to have teachers as role models.

“Scholars have argued about whether and how coming out might benefit our students,” Gerdes said. “I think because my gender is non-conforming, I’m out in the classroom whether I say anything to come out or not.”

A school’s atmosphere can also affect how willing gay or lesbian teachers are to come out in the classroom, according to sociology graduate student Carlos Barreto-Beck.