Rotnofsky-Mandalapu campaign is about more than making jokes 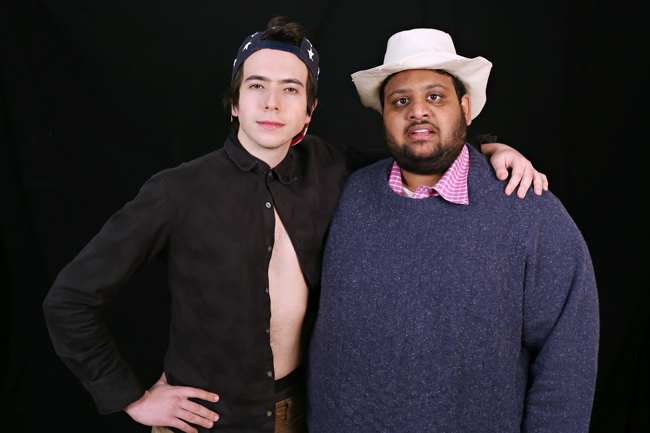 In a recent op-ed piece, Nicole Kruijs provides an uncharitable and one-sided description of the Rotnofsky-Mandalapu campaign for Student Government president and vice president. She emphasizes the satirical elements of their message without paying heed to the substance that undergirds that satire. Fairness demands a more considerate treatment of their candidacy.

“Jon Stewart is hilarious,” Kruijs says. "But I wouldn't want him to be president of the United States."

This analogy is disingenuous in that it presumes the qualities required of the two offices — president of SG and president of the United States — are identical. This is fallacious.

As commander-in-chief of the armed forces and custodian of our nuclear arsenal, the president of the United States must obviously possess attributes that extend beyond compassion and a willingness to listen to the people who elected him.

This is not so for the executive officers of Student Government. Their role — their only role — is to be a faithful representative of the student body — the whole student body. Kruijs concedes this much later in her piece.

Rotnofsky and Mandalapu evince a desire to fulfill such a representative role. As evidence of this fact, I direct the reader's attention to their profile in the Daily Texan, in which Mandalapu provides an eloquent response to the question of what's wrong with Student Government, namely that it's unrepresentative. Mandalapu has noted that only 15 percent of the student body voted in last year's election, which — amusingly — was considered a record turnout.

Mandalapu attributes this lack of participation to the fact that SG has recently been dominated by Greek and spirit organizations, an arrangement that inhibits less represented student organizations from receiving SG funding. While I can’t prove this beyond a reasonable doubt, I do have reason to believe it is true. As treasurer of UT's Undergraduate Classics Society, I have seen SG and Senate financial officers ignore my organization’s request to borrow the required credit card after completing the mandatory steps to receive funding for an event.

Without attributing any malicious motives to the other two candidates, I do assert that they undeniably fit the profile of the unrepresentative elements whose influence within SG is alleged to be disproportionate. This is precisely why I support the Rotnofsky-Mandalapu ticket: a consideration of what the two campaigns stand for. That students do not engage in such a consideration is no fault of their campaign.

Kruijs also suggests that the Jones-Dargahi slate, unlike Rotnofsky and Mandalapu, will "listen to you" as the official representatives of the student body. This allegation I find generic, insincere and unsubstantiated.

Consider the recent Assembly resolution to remove the Jefferson Davis statue from the Main Mall. Rotnofsky and Mandalapu, taking into account the discomfort the statue's presence creates for students of color, are taking action to bring about its removal. Though Jones admittedly signed on as a co-sponsor, this resolution should be adduced as an example of the Rotnofsky-Mandalapu ticket's willingness to listen to students. I find it more reassuring than a Twitter hashtag.

Indeed, all the measures Kruijs attributes to the Jones-Dargahi ticket — "building bridges across communities," for instance — are ill defined; they're broad, and what's more, they're not accompanied by specific examples of how Jones and Dargahi propose to accomplish such an objective, other than "relationships" (more on that below).

This is precisely the sort of electoral laziness that Rotnofsky and Mandalapu seek to ridicule when they propose Adam Sandler movies as a method by which the Assembly and the Executive Board can develop greater rapport. I find their humorous attempts to underscore the insincerity of conventional responses to such issues less insulting that their opponents' assumption that they can walk away with the election with empty phrases. Kruijs seems to assume that the campaign's satire is gratuitous, that it isn't directed at any systemic shortcomings. This I find overly simplistic.

Finally, Kruijs attributes the connections Jones has established with alumni, faculty and administrators during a time of administrative transition as reasons to support his candidacy. She provides no assurances that such connections are representative — that they fulfill precisely the role she says SG should play in conveying the concerns of the student body to higher authorities (I find the allegation that any bill adopted by state legislators depended upon the support of a UT student ludicrous on its face; Kruijs provides no evidence — short of the fact that she and her colleagues "voiced their support" — that Jones was instrumental in SR 11's or AR 30's passage). I would appreciate confirmation that Jones can use his connections responsibly, or at the very least evidence suggesting he is capable of so doing.

Dean-Jones is a Plan II, history and classics senior from Austin. He is not officially involved in the Rotnofsky-Mandalapu campaign.