Nipping: the next frontier of bioprinting 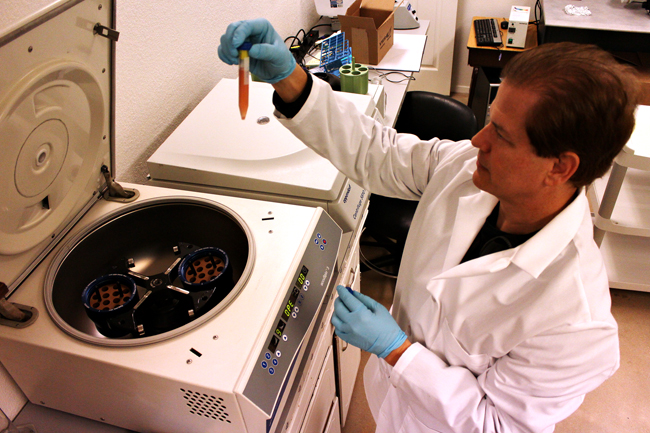 The printers in the TeVido Biodevices office don’t print concert tickets or English essays — they use live fat cells to print nipples and areolas.

TeVido, a technology company that just moved to Austin, has the primary goal of developing techniques to print human tissue using 3-D bioprinters. The company’s first project is printing nipple-areola complexes (NAC) for breast cancer patients who have undergone mastectomies. Currently, reconstructing the NAC after a mastectomy typically involves invasive surgery and color tattooing. If TeVido’s project succeeds,doctors will be able to adhere printed NACs to breast cancer patients in a matter of minutes.

TeVido co-founder Laura Bosworth and Chief Technology Officer Scott Collins will lead a discussion about the company’s endeavor during South By Southwest. The event, “3D Bioprinting: The Next Revolution in Healthcare,” takes place Monday at the JW Marriott.

Scientists have used 3-D bioprinters to print skin, tracheae and even bladders, but they typically have difficulties keeping the tissue alive in a human body. If the tissue is more than 1 millimeter wide, cells on the interior of the tissue are less likely to receive necessary oxygen and nutrients. Human muscles have solved this evolutionary problem with billions of small veins and other vascular channels.

Collins said the team is trying to increase the width of a viable printed organ from a millimeter to a centimeter.

“Being able to direct and steer the growth of vascular channels would allow us to do the kind of engineering we need to make something more complex,” Collins said.

As the mortality rate of breast cancer continues to decrease, as it has since 1989, more breast cancer survivors live with scars from mastectomies. Collins said these scars can cause negative psychological consequences, including depression, and patients with well-reconstructed NACs are less likely to experience these effects.

TeVido’s reconstruction technique uses a given patient’s own fat cells. Since the cells belong to the patient, the patient’s immune system is less likely to reject them. The NAC is relatively small and most patients have plenty of fatty tissue to spare, so doctors can easily collect it during surgery.

“The nipple will look exactly as the patient wants and grow with her over the rest of her life,” Collins said.

When the TeVido team finishes the NAC project, Collins said kidneys are next on the list. The NAC project might not be finished for several years, Collins warned.

“The clinical trials will probably take three years and cost tens to hundreds of millions of dollars,” Collins said.

All around the world, researchers at a number of other facilities are conducting similar projects. Researchers at the Huazhong University of Science and Technology printed a miniature, functioning kidney that could survive for four months in a lab. Organovo, an American technology company similar to Tevido, has created viable liver tissue.

Collins said he dreams of using bioprinting technology to change lives in a powerful way.

“I did most of my research in cellular regenesis and vascular engineering,” Collins said. “The idea was to apply that to developing an artificial heart.”