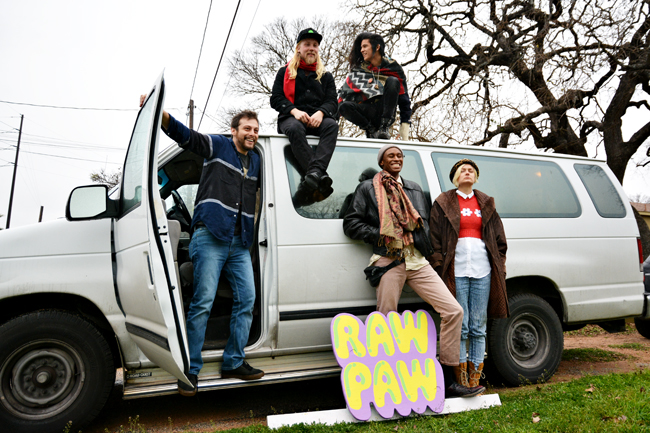 Whether you’re a doodling college student or an artist with decades of experience, Austin-based media label Raw Paw wants to represent you.

When Will Kauber and UT alumnus Chris Davis founded Raw Paw in 2010, it was a group of artists and friends searching for a creative outlet. Five years later, Raw Paw was voted best record label at the Austin Music Awards.

The community represents a group of pop-culture artists who want to network with people who share similar interests and passions. Davis said Raw Paw helps its members create a living off of what they love to do.

“We’re trying to wipe away the grit and muck of life and find their true potential,” Davis said. “Then, on our end, try to make and establish and figure how to open up doors for that artist.”

Raw Paw publishes a series of poetry chap books, each of which features 20 original poems from a single artist and is designed by CogDut, a customized screen printing business run by Davis and Kauber.

“[Raw Paw and Hikes have] been growing together, instead of just watching something grow or being left behind,” Wilkins said.

Davis said Raw Paw focuses on a few bands at a time, creating a team of people who lift up one another. Raw Paw also promotes Milezo, Young Tongue and Chipper Jones.

One of Raw Paws’ bigger projects, “Raw Paw the Zine,” is an annually published book that incorporates submissions from the public. This year, the zine has an alien theme.

Kauber said the Zine hosts a release party that encompasses all of the artistic elements.

“[Zine] is a way to capsulate a culture and disseminate information,” Kruczynski said. “It’s more of a art collective than a business — very inclusive.”

Kruczynski said the group represents a creative pocket in which the goal is to fulfill artists’ dreams.

“We’re encouraging friends and the people around us to pursue their true passions,” Davis said.

The founders of Raw Paw said they advise everyone to obtain a degree in what they love and find a way to make a career out of it.

“We’re taking a last stand at trying to convince our community that you can do this and make a living,” Kauber said. “Just keep trying; we’ll keep helping; we’ll keep working together.” ​