Catch us if you can: Women’s track and field aims to make up for last year’s disappointment 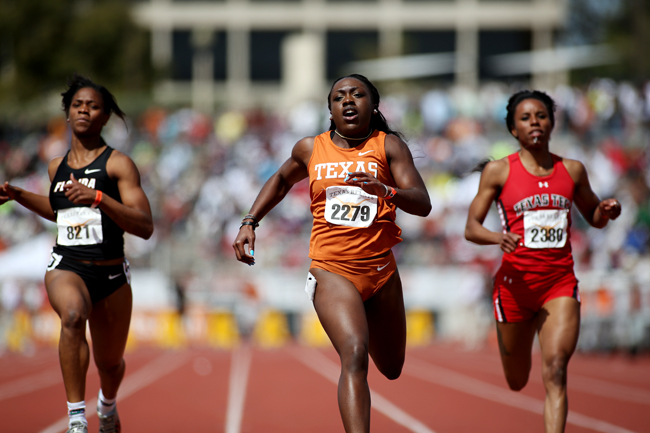 On a cloudy day at Mike A. Myers Stadium earlier this week, the Texas women’s 4×400-meter team laughed as they leisurely jogged off the track, sweat drenching their burnt orange warmups.

Despite their calmness, just a three-hour plane ride separates the nation’s top-4×400-meter team from the stress of the indoor NCAA Championships, the crown jewel of college indoor track and field.

“When you have some of the best 400-meter talent in the country — if not the world — what’s to be nervous about?” Spencer said.

The Longhorns have been in this situation before, however, coming out on the losing end. Last year at the women’s championship meet, Texas held a 1.5-point lead over Oregon, and the last race, the 4×400-meter, of the meet held the title.

Coming down to a photo finish, the Ducks edged out the Longhorns by a beak.

Oregon recorded the fastest 4×400-meter time in collegiate history; Texas recorded the second-fastest. But the Longhorns’ loss, coming at two-tenths of a second, propelled Oregon past Texas, giving them the women’s title by half a point.

“[We have] so much fire and energy from what happened [last year],” Akinosun said. “We’re ready to use that and go out and compete this weekend. Sure, on paper, we’re ranked first in our event and fifth in the country, but you don’t run the race on paper”.

Okolo, a Bowerman hopeful, believes their experience last year and in other indoor meets this season will only help the team this year.

“We were really close last year, but, this year, we’re more experienced,” Okolo said. “We’ve been on the national stage together, so now we know what it takes.”

This is the first full season Akinosun, Okolo, Baison and Spencer have been together on the 4×400-meter team at the national level. Although the group ran together last season, Akinosun didn’t compete in the championship meet.

“We know each other, and we want to win this with each other and for each other,” Okolo said.

The strong chemistry between the foursome has only helped their success.

They even keep up each other’s superstitions. Akinosun has had two batons since her senior year of high school that she has never let touch the ground.

“There are a lot of times when you’re a head coach, and you stand back in awe,” head coach Mario Sategna said. “These girls provide one of those times. They push each other to the max, and it’s fun to watch.”