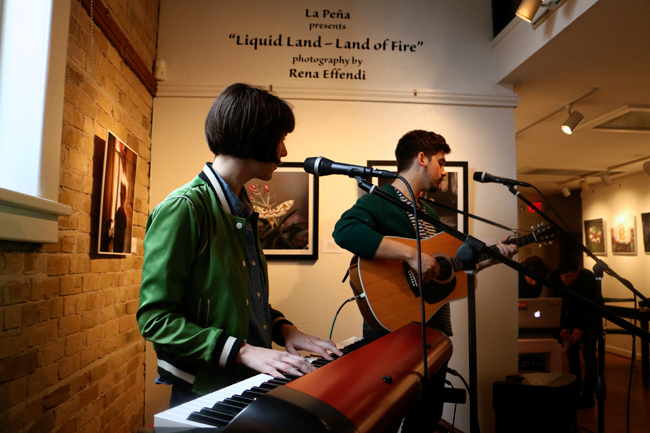 Dolfi said the artists he met during his travels to Azerbaijan captivated him. He knew he had to bring their unrecognized talents to America.

“There are a lot of imaginative, creative people sort of hidden away,” Dolfi said. “Many people here don’t know anything about it.”

Dolfi said the artists come together to represent a poetic voice from a relatively unknown country. The photo series, titled “Liquid Land — Land of Fire,” compiles Effendi’s portraits of Azeri people and images of regional butterflies that Effendi’s father took.

“This is not just a photojournalism project; this is a connection from the area that [Effendi] grew up in,” Dolfi said. “She has this loving connection to her father, his work and photographs that were never published in his lifetime.”

In addition to the photographs, a number of musical artists from Azerbaijan will perform at the gallery during South By Southwest. Qarabagh Ensemble and Qaraqan, who will perform at an official SXSW showcase of artists that perform traditional Mugham folk music, will take part in the exhibit.

In an effort to make the exhibit interactive, Effendi’s printed photographs will hang along the north wall of the gallery and in trees surrounding the gallery — free for the taking.

Dolfi said “Liquid Land” stands out in SXSW’s increasingly commercialized climate. The project seeks to offer personal art that aims to bridge a gap between two communities isolated from one another, according to Dolfi.

Ormiston filmed Azeri musicians when he traveled the country last summer. His footage will play in the gallery alongside the photographs and music performances. He said the archival footage acts as a window into an unseen world.

“I think it’s more like visual poetry. The way we shot it, it’s like a postcard of Azerbaijan,” Ormiston said. “It’s a way to show the culture, sites and sounds. It’s supposed to give you a sense of what the country’s like in a broad stroke.”

“Exposure to these powerful images connects us to distant realities, like the Azeri one, that both differ dramatically from our own, and yet, in their enduring humanity, are also deeply familiar.” Neuberger said.