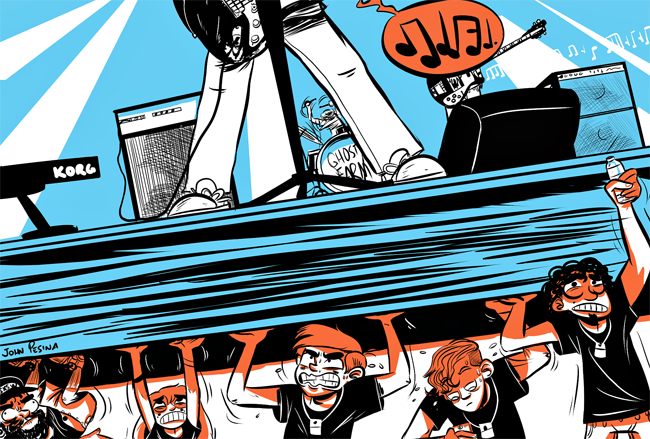 South By Southwest takes place during one of the most celebrated collegiate holidays: spring break. In order to accommodate the influx of people, festival managers recruit volunteers from around the world, but many of them come from right here at UT.

One of the biggest appeals is a SXSW event badge. The badge grants access to SXSW festivities based on the amount of time one volunteers. Badges range from the lowly gold badge to the highest honor, the platinum badge.

Radio-television-film junior Cameron Saenz will volunteer at SXSW for the first time. He said volunteers are required to spend at least three days working the festival. While working during spring break may not be at the top of every student’s spring break wish list, music headliners and new film documentaries lure volunteers away from typical vacations to experience SXSW.

The volunteer program receives more than 3,500 applicants each year, according to SXSW’s main website. The volunteering process begins as early as January in order to prepare volunteers for the program, and it ends at the conclusion of the festival.

“[SWSX’s] volunteer process can be confusing, but it’s worth it,” Saenz said. “It increases the level of professionalism for each volunteer.”

Saenz said applicants are given two options: They can be conference volunteers or production volunteers.

Samantha Huang, linguistics sophomore and past volunteer, said the main difference between volunteering jobs are the shifts. Conference volunteers work hourly in the Austin Convention Center doing jobs such as helping panelists, checking tickets and working closely with the SXSW planning staff. Production volunteers work in shifts assisting at music clubs, on streets and behind the scenes of SXSW.

“One day, I was working a film venue, taking tickets, and the next day, I was stationed in the Austin Convention Center running badges,” Huang said. “The job was constantly changing, and there was never a dull moment.”

Saenz said a variety of people volunteer for SXSW, and there is no stereotypical volunteer.

“I’ve seen an entire family volunteering as though it is some tradition,” Saenz said. “Some people are new to volunteering, but some have been volunteering for up to 24 years. No one is too old for SXSW.”

Saenz said he chose to volunteer based on his interest to meet producers and directors. For Huang, it was access to the free parties.

Rebecca Ramirez, English junior and a second-year volunteer, said a benefit of volunteering is meeting people from various backgrounds. She said the workload was worth the interaction and networking opportunities that come with volunteering.

“It was a hectic and busy job,” Ramirez said. “But I enjoyed being a volunteer and encourage those daring enough to give it a try.”