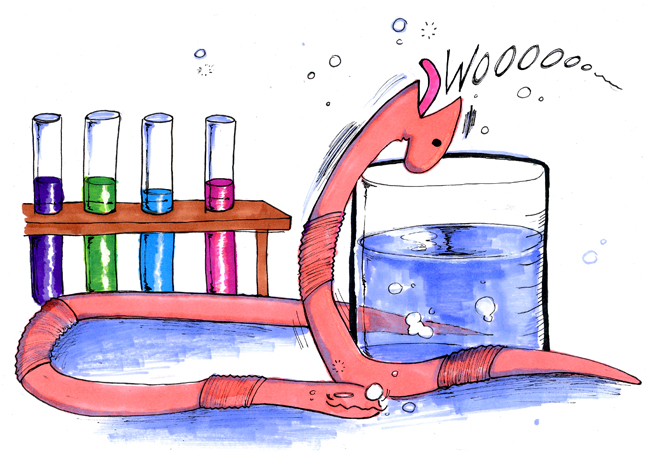 A team of UT neuroscience researchers found a way to create mutant worms that can resist the effects of alcohol, a discovery that might one day lead to improved treatment for people who suffer from alcoholism.

Neuroscience assistant professor Jon Pierce-Shimomura discussed the research, which was published online in July, earlier this week in a podcast for The Academic Minute.

In the podcast, Pierce-Shimomura, who oversaw the project, said his team found a way to mutate a worm’s molecules so that alcohol that usually sticks to a molecule on a brain cell is blocked. This means when the mutated worm is later given alcohol, it won’t show effects of intoxication.

While the research is still in the testing phase and it will be many years before it can be applied for practical use, it might eventually lead to a drug that counteracts the addictive and intoxicating affects of alcohol, Pierce-Shimomura said.

The research for the project began about five years ago and has involved rigorous testing, according to Luisa Scott, a University research associate who worked on the project with Pierce-Shimomura.

“Alcohol has a lot of protein targets, and we’re interested in understanding how some of those targets contribute to intoxication, with an overall goal of being able to treat people with alcohol abuse,” Scott said. “A better understanding of how these proteins work can enable us to design a drug or some other variety of manipulation that would be able to prevent people from getting intoxicated.”

Scott said if a drug one day exists that combats the effects of alcohol, people might be able to drink without getting drunk. Scott said medication that can better assist alcoholics in this manner is still years away.

Worms are useful for medical research, because structures of the relevant molecules are identical across all organisms, according to Sarah Nordquist, a neuroscience graduate student who witnessed the study.

Still, more research on the factors that impact an individual’s reaction to alcohol — a person’s tolerance level, for example, or the way they deal with cravings — will ultimately be necessary for the research to have practical medical applications.

“Anybody that works in research on non-humans — there are going to be problems and obstacles,” Nordquist said.

If the research eventually leads to a medication that helps alcoholics, that would be a major scientific development, biology and psychology sophomore Kalisi Logan said.

“Though we’ve mapped the human genome, if we’re able to transfer a mutation from a worm to a human to treat a disease, that would be great,” Logan said.