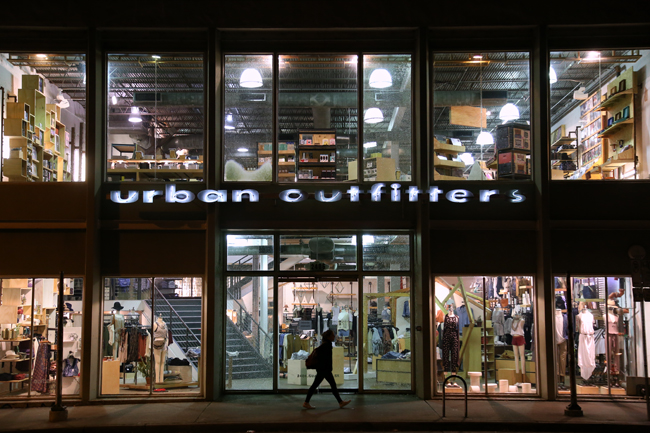 In late February the Texan reported that Austin’s Urban Outfitters, located on a central part of Guadalupe Street across from the University, purchased the leases of five buildings in order to expand its store. The clothing store is planning to add two restaurants and more shopping space, which it hopes will be completed in the fall. However, the lease takeover negatively affected the two of the leases, which are still in business: Manju’s and Mellow Mushroom. The stores were not able to renew their leases due to the buyout.

The Drag, the lovingly nicknamed spot on Guadalupe Street across from the University, has been in decline since the 1980s and beloved sites have been disappearing, in particular Tower Records and Raul’s. Over the past decade the street has been become more and more decorated by corporate shops, such as Einstein's Bagels, American Apparel and, of course, Urban Outfitters.

While the expansion may be a good thing for some shoppers, it goes directly against Austin’s famous slogan, “Keep Austin Weird”, meaning support local businesses. Urban Outfitters' expansion is eliminating Manju’s, a business that has been a staple of the Drag for almost four decades. With the expansion of Urban Outfitters, students are given more limited options on clothing shopping, forcing them to support corporations rather than small Austin businesses.

Manju’s employee Natalie Tiner wasn’t optimistic about the buyout, either.

“[The buyout] is definitely going to make the Drag more corporate,” Tiner noted. “Our owner has had this store for 37 years and sold directly to the students of UT. It’s been a very personal exchange, and with a corporate store coming in, it’s going to be less personal."

“We’ve had moms come in with their daughters saying that they had shopped here when they were in college…and they can’t do that anymore," Rincones said.

With the closing of Manju's, the University community is losing a familiar staple on the Drag.

Urban Outfitters' expansion is a troubling event for Austin’s slowly dwindling small-business community. Unfortunately, high rent and corporations have been pushing out small businesses in favor of corporations. The beloved Toy Joy was pushed out of Guadalupe Street in 2013 after the owners noted in an open letter that the “neighborhood was becoming more expensive to do business in." The store was replaced by corporate Langford Market. Urban Outfitters' expansion may not come as much of a surprise, but it is still troubling for a city that prides itself on its small businesses.

Ultimately, the expansion is a sign of the times in Austin. As the city grows, it is losing the ability to be weird. The expansion may be seen as a good thing because it will clean up the block, but unfortunately it comes at a price. As Tiner said, “[The expansion] can construed as progress, but for the community and the people that have been here for years, it's not. It’s destructive."