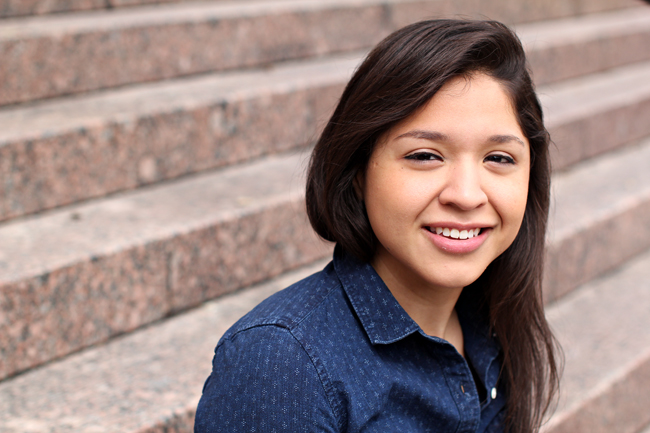 While many students relax on the beach or drunkenly meander on Sixth Street for spring break, Jazmin Diaz will spend the week screening her short film, “Carne Seca” at South By Southwest Film Festival.

Diaz, radio-television-film and marketing senior, wrote and directed the short “Carne Seca,” which means “dried meat” in Spanish. The short follows the story of two young brothers in rural Mexico who must sell a cooler full of meat before sunset or face the wrath of their aggressive father. It premieres Friday at the Long Center and screens again Tuesday and Thursday in different theaters around Austin.

The 11-minute, character-driven drama pulls extensively from a feature-length film Diaz originally wrote for a screenwriting class last spring. “Carne Seca” combines the characters from that feature with stories Diaz’s dad used to tell about his experiences selling meat out of a truck in Mexico, she said.

Production for “Carne Seca,” began last fall in another of Diaz’s classes — her Advanced Narrative Production course. After a month, 20 students submit a script, and the class votes on which five scripts should be produced. “Carne Seca” was one of the five shorts chosen.

The weekend her script was chosen, Diaz and radio-television-film seniors Haipei Han, the producer, and Jonathan Cox, the cinematographer, hunted for a filming location. The trio departed on an 18-hour road trip across Texas in search of a site that resembled the vast, open countryside of rural Mexico.

After 17 hours of no luck, Diaz said she and her crew stumbled across a pastoral Mexican landscape in the back of a trailer park in Blanco, Texas. Behind the trailers stood a little blue house with lazy farm animals and a chicken coop. She said it was exactly what she had envisioned.

Diaz said casting proved to be her next challenge. After deciding to cast people who had never acted before to make the film feel more authentic, she found the first brother inside a local boxing center and the second through an audition she held inside a middle school locker room. Diaz said the two boys were exactly what she was looking for.

“The characters were so distinctive and personality-based, it wasn’t about spitting out certain lines,” Diaz said. “It was more about demeanor. [The two boys I found] were the epitome of what these characters were.”

With editing help from radio-television-film senior Michael Gonzalez, the team submitted “Carne Seca” in November to the SXSW Film Festival. Diaz said she never expected “Carne Seca” would get accepted into the festival.

“We’re just excited because we’re so young,” Diaz said. “It feels like this is the beginning of a lot of other things. This film is my most intensive in that there was a huge production crew, and I finally learned the different facets of filmmaking and how to bring them together. This one felt like a complete story.”