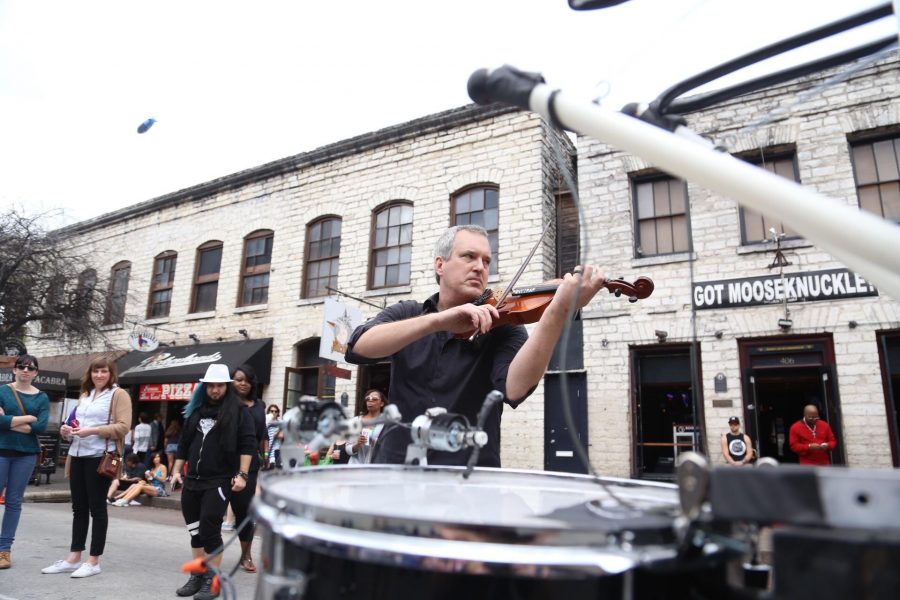 Four years ago, Austin music teacher Quentin Thomas-Oliver went looking for a drummer willing to play the type of music he wanted. When he couldn’t find one, he built one.

“So I had this idea of playing classical, tribal, industrial music,” Quentin said. “Everyone makes a face, which is fine, but it’s my thing.”

His two homemade robotic drums make up 50 percent of the band Pony Trap. The other two members are Quentin and his wife, Hillary Thomas-Oliver. The husband, wife and their robot bandmates spent Sunday afternoon walking up and down Sixth Street promoting their show at The Dive on Friday.

“The drums just give this huge, powerful, pounding drive to the music and we’re just hanging on for dear life,” Hillary said. “[The drums] are running the show and we’re just trying to keep up.”

Quentin emphasizes he’s not in it for anything but an artistic challenge.

“The end goal is to make art,” Quentin said. “What I want to do is no different than what any other band wants to do. I have an artistic thing that I want, that I think matters — for whatever that’s worth — and I just want to get it out.”

When the two have a free afternoon, they load the robot drums in the back of Quentin’s Chevy and drive down South Congress Avenue for what Hillary calls a “robot parade.” Apart from that, they aren’t looking to manufacture the electronic drums.

“[Pony Trap] is just for us,” Hillary said. “He’s not looking to get into the robot-drum-making business.”

Both Hillary and Quentin agreed that the music is bizarre but urge listeners to be open to the idea of a robot band.

“I know this sounds absurd but I love that they are what [the drums] are,” Quentin said. “Hopefully as we make our music, [people see] they’re just a part of the band.”