March Madness preview: What you need to know about Butler University basketball 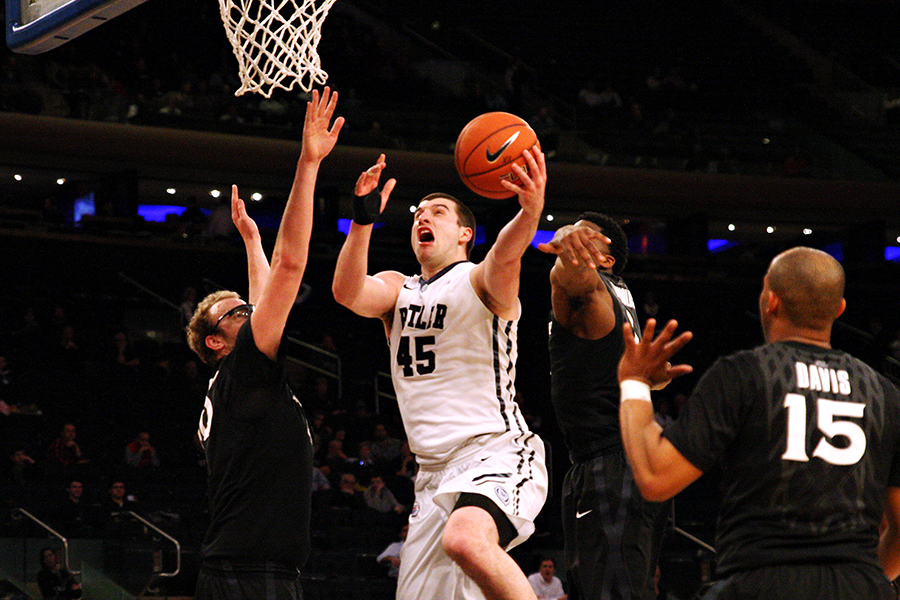 Jones is a driver. That’s it. He averages 11.2 shots a game, with every single one of those coming from beneath the arc. He’s a 6-foot-4 forward because he doesn’t have a shot. Inside the arc, he has a bevy of unorthodox ways to get to the cup—and he does it well. He averages 12.6 points per game.

Dunham is the Bulldogs’ go-to man. He is their best shooter, and, at 6 feet 6 inches, finds ways to score from all over. He shoots 41.5 percent from behind the arc to the tune of 16.7 points per game. He also finds his way to the line, where he shoots nearly 86 percent, with ease.

Chrabascz may have been the missing link for head coach Chris Holtmann. The 6-foot-7 forward does most of his damage in the paint, but he can also stretch the defense out to the 3-point line. His weakness is at the line, where he shoots under 60 percent.

The rest of the Butler roster is the supporting cast on offense. Senior guard Alex Barlow can hit some threes. Senior forward Kameron Woods can bang down low. Each averages over 30 minutes a game but attempts just 12.5 shots per game combined.

The only Bulldog who adds anything significant is freshman forward Kelan Martin. He’s most efficient in the lane and averages 7.3 points per game.

As a team, Butler is just average offensively. The offense is not the Bulldog's bread and butter; they can do a little bit from all over but nothing exceptional. One glaring weakness for them is their free throw shooting. Despite Dunham and Barlow shooting at incredibly high rates, the team still shoots just 68 percent. Every other Bulldog to get significant minutes shoots below the 70-percent mark.

The Bulldogs also find themselves on the other end of a rejection quite frequently. With an undersized lineup, they get turned away at the 279th highest rate. Not good news for them going against Texas’ leading shot-block unit.

While they aren’t great offensively, they work hard and do the fundamentals. They will attack the glass while rarely turning the ball over, especially against a Texas team that forces next to none.

This is Butler's strength. The Bulldogs' prides themselves on their defense. They aren’t big, but they play as a team, making things difficult for opponents. They run opponents off the 3-point line and keep them off the glass extremely well.

The 5-foot-11 Barlow leads the defensive unit, which plays with tenacity on that end. They work hard around screens, chase down shooters and make everything difficult. They are best in man-to-man but will use the zone occasionally.

Statistical Comparison: Texas and Butler are statistically similar, but with entirely different styles of play

Column: Texas needs to take advantage of its size when facing Butler