Longhorns stage comeback to advance to second round of NCAA tournament 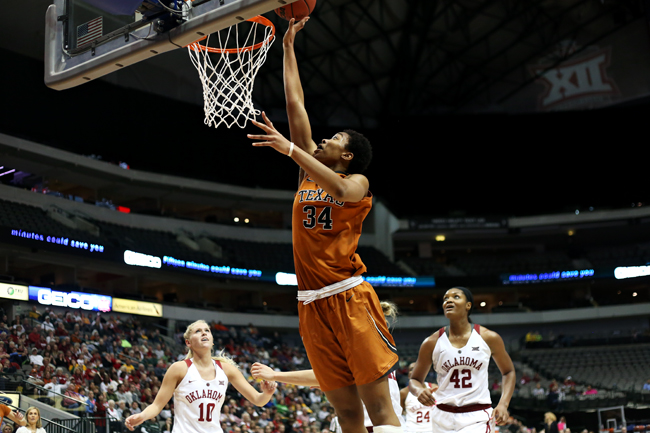 Texas has become quite familiar with deficits this season. But down by 6 points late in the second half Friday, Texas started to streak.

With the game tied with less than 20 seconds to go, a Lady Toppers foul sent freshman guard Brooke McCarty to the charity stripe, where she sank both free throws to help Texas hang on to a 66-64 victory over Western Kentucky in the first round of the NCAA tournament.

“I told our players after the game that this was obviously a hard-fought win, and it was nothing to be ashamed of that it went to the wire because I was so impressed by [Western Kentucky] … ,” head coach Karen Aston said. “I knew they would present problems for us from a matchup perspective.”

The game featured 10 lead changes, with each team leading for about 18 minutes each. Texas’s defense held the Lady Toppers to 29 percent shooting in the opening period, but 13 first-half turnovers by the Longhorns kept the game close early.

“We stopped turning the ball over in the second half and started attacking and that was really ultimately the difference,” Aston said. “I am proud of our players for holding in there, and it wasn't easy with first-game jitters. I thought we really held in there.”

Junior center Imani McGee-Stafford, who started against Western Kentucky, picked up a double-double, scoring a season-high 24 points and grabbing 15 boards. She said the game scenario seemed all too familiar.

“We were in the huddle in the last four minutes, and I just kept thinking to myself, ‘We've been here before. We've been here before. We've come back from 6 or 8 points with just a little bit of time left,’” McGee-Stafford said. “So I think it's good knowing that we are able to come back, and we have the experience from games earlier in the season.”

Texas has come from behind to win in multiple games this season. Aston's lineup change gave the Longhorns NCAA tournament experience, as Friday’s starting five was the 12th different lineup in 33 games this season.

“I think because of the experience we have, we know how hard we have to push because we have lost games like this,” McCarty said. “So we just thought back to those games every time we were in the huddle, and we just pushed and pushed and pushed, and we came out with the win.”

The first-round win gives the Longhorns their 23rd victory of the season, the team’s most since the 2003-2004 season.

“I think getting this win under our belt is a great confidence booster for this team, and obviously, every game we can play is a positive for this program,” Aston said.

The Longhorns look to continue their momentum into the second round, as they face No. 4 California at 8 p.m. Sunday on ESPN2. The winner moves on to the Sweet 16.