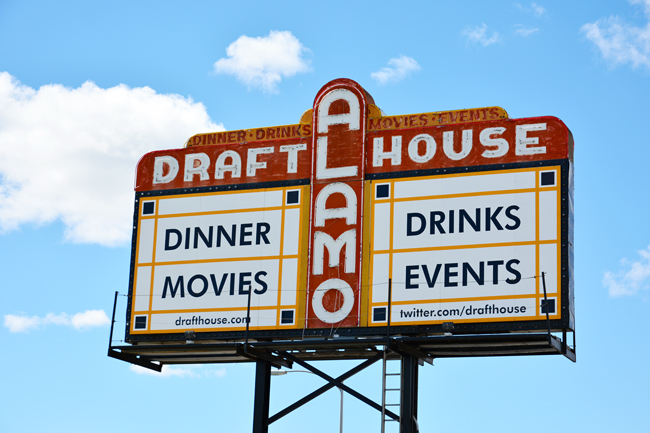 “Ever since Mueller was first announced many years ago, we have loved the idea of opening up a theater there,” Alamo founder and CEO Tim League said in a press release earlier this month. “Mueller is a groundbreaking development and a really cool neighborhood.  We are excited to be working with Catellus here and honored to be a part of it.”

The new Drafthouse will have six screens and 600 seats with a bar adjacent to the theater. Radio-television-film junior Jake Palmer said he thinks another Drafthouse will be great for students living off campus.

“I live on 46th and Airport, so I’d benefit greatly from this one,” Palmer said. “I know most students that live off campus live in West Campus, but the cool kids who live in North Campus will love it. A lot of the ones that students go to are pretty far away from campus — going all the way west to Anderson Lane. It’s a bit of a hike, and I think the bus service to Mueller is a lot better.”

The Mueller community, a development that replaced the Robert Mueller Municipal Airport when it closed in 1999, is a project of the city mixing affordable housing, regular market price housing and other businesses, said Pam Hefner, the redevelopment project manager with the City of Austin’s Economic Development department.

“We have the children’s hospital, the Thinkery, [and] tons of retail,” Hefner said. “So far there’s 100,000 square feet of institutional uses. We have a Dell Pediatric Institute [and] Seton Medical Center [as well].”

The development is 700 acres and about 40 percent complete, Hefner said. The City is in a private partnership with Catellus, a development corporation, to oversee the implementation of the Mueller Council’s design book.

“Their job is to do the development part, and we have a master development agreement with them,” Hefner said. “They build a huge amount of infrastructure, they had to do all the planning, sign third parties to build buildings on it. We had a master plan for the whole site, and they find the third parties. They found the Thinkery, they helped get Seton and they find home builders to build housing.”

Catellus has been in communication with Alamo Drafthouse for years to help orchestrate the deal, Hefner said.

“Alamo Drafthouse is an incredibly popular Austin institution, and we’re thrilled they have chosen to expand to Mueller,” said Deanne Desjardin, vice president of Mueller Marketing and Communications. “Alamo will help establish Mueller’s town center district, Aldrich Street, as entertainment destination, attracting retailers, restaurant s and other businesses as well as many Austinites to the district and to the entire community.”

Alamo Drafthouse Mueller is slated to open in 2016. Construction will start either this year or early next year.