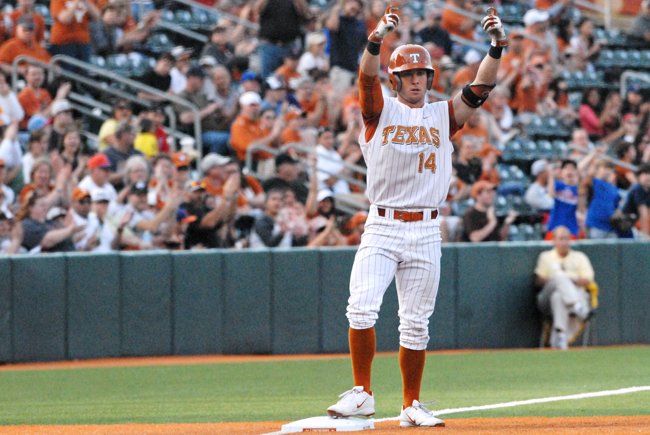 In the fifth inning Sunday, Collin Shaw launched a ball onto Comal Street for a two-run home run.

After breaking a 1–1 tie in the same inning, the senior right fielder’s second home run of the season at UFCU Disch-Falk Field gave Texas a 4-1 lead over No. 14 Kansas State.

“[I’ve just been] going [to the plate] with the approach of helping the team win no matter the situation,” Shaw said.

Texas eventually took a 6–1 win and secured a three-game sweep over the Wildcats.

The Longhorns jumped on Kansas State early in the game. After the Wildcats retired the first two Longhorns in the first, junior shortstop C.J Hinojosa lined a ball into right for a single. Sophomore catcher Tres Barrera then brought Hinojosa home with a double off the left-field wall.

Texas had a chance to add to its 1–0 lead in the second when redshirt freshman Bret Boswell hit a lead-off single and freshman catcher Michael Cantu followed with a walk. Sophomore pitcher Kacy Clemens batted in the designated hitter’s spot and bunted the two runners into scoring position, but Texas left them stranded.

The Wildcats took advantage of the Longhorns’ misfortune in the third, as Kansas State tied the game at 1–1. The game went into a stalemate until the fifth inning, when junior left fielder Ben Johnson hit an RBI double to give Texas a 2–1 lead. The Longhorns continued their onslaught with Shaw’s two-run blast.

Texas added a run in the seventh inning and its final run in the eighth, when Boswell hit an RBI single down the middle to score Barrera and extend the lead to 6–1.

After a disappointing midweek loss to UT-Arlington, Johnson said coming back and the hitting the ball well this weekend helped Texas’ momentum.

“You got to give credit to [UT-Arlington]. They played a great game,” Johnson said. “It’s just something we had to learn from. We have a great, mature team, and if something like that happens, we got to learn from it. And I think we did that this weekend.”

In addition to Texas’ hitting Sunday, the Longhorns turned in solid performance from Clemens. He pitched five innings, allowing two hits and one run and striking out one.

“[Clemens’] outing was good,” head coach Augie Garrido said. “Each time, he’s progressed. That’s what winners do. That’s only the seventh time he’s pitched in two years. He’s quite an improvement and quite an addition to the pitching staff.”

Although Garrido said he liked what he saw from Clemens, Clemens said he still felt he had room to improve.

“I think my changeup and slider has been better,” Clemens said. “I think I had the best stuff against UT-Arlington. Today, I really couldn’t locate my off-speed as well as I wanted to.”