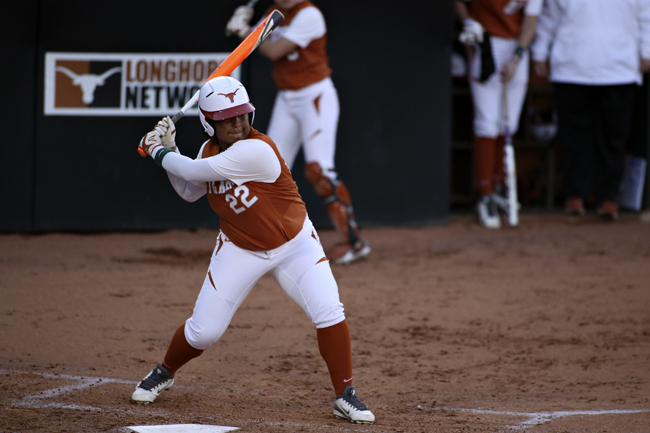 After four years on the diamond for Texas softball, Karina Scott had a hard time leaving. However, she soon found out she didn’t have to.

After appearing in 38 games as a freshman, Scott started in 41 games the following year. Scott ranked highly on the team in numerous batting categories and achieved a perfect fielding percentage as a sophomore.

The coaches soon saw potential for Scott — not for a career at first base, but in the dugout. At the end of Scott’s second season, the coaches offered her a spot on the coaching squad upon graduation.

“I was shocked, and I was like, ‘Are you guys talking to me? Are you serious?’ ” Scott said.

Despite the surprise, it took little convincing to sway Scott.

“I jumped on it,” Scott said. “I knew what I wanted to do, and I knew it would be a great way to build my résumé and get started.”

When she was offered the job of volunteer assistant, Scott had only recently begun considering coaching because she had begun to support many of her teammates. Scott said she always played the role of “the big sister” and stepped up when the teammates needed help.

After months of offseason training, the Longhorns took the field for their first game of the year in early February in Tempe, Arizona. No longer sporting a player’s jersey, Scott stepped out of play in a new wardrobe: a
coaching uniform.

Even with her new title, Scott’s characteristically friendly attitude toward her former teammates
hasn’t diminished.

“She’s still playful with us. She still interacts with us,” junior outfielder Lindsey Stephens said. “She’s still that friend, that teammate we had last year.”

Scott even offers a special
perspective that some of the other coaches can’t give their players.

A California native, Scott did not personally adopt softball until her teen years, although she grew up surrounded by the sport. Scott used to spend most of her time on the baseball or softball field because her uncle and older
brother played often.

Just before high school, Scott picked up softball at the age of 13 with an ulterior motive separate from the competition and
winning aspects.

“I realized I needed a way to get to college, and I wanted a scholarship, so I told my parents I wanted to start playing softball,” she said.

Scott thrived instantly. A four-year letter winner in high school, a recipient of All-California recognition and various other accolades, Scott finished her senior year of high school batting over .400, slugging over .600 and with a spot on the Texas softball team.

While she strives to complete her goal of becoming a head coach, Scott plans to return to school soon to pursue a degree in education or sports management. Currently in a one-year position, Scott hopes her time doesn’t stop anytime soon.

“I would love to be the head softball coach at Texas,” she said. “[Connie] knows I want her job, and she said I could have it."