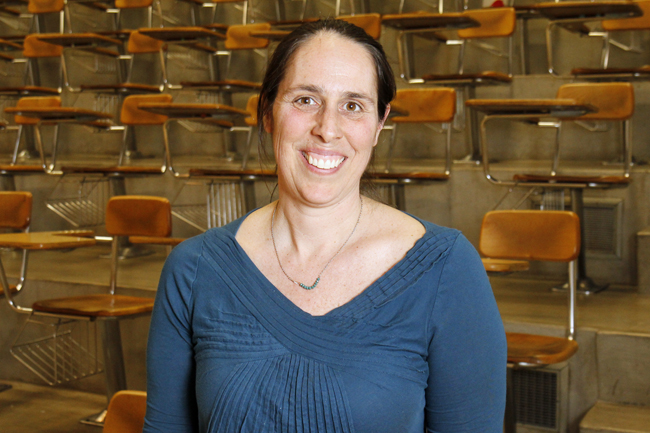 Textiles from ancient Italy provide insight into the complexity of ancient societal rituals, such as weddings and funerals, and shed surprising light on the role of women in Etruscan society, according to archaeologist Gretchen Meyers.

Meyers, who spoke Tuesday at the Art Building, said the three main materials she focused on in her archaeological excavations were textiles, textile tools and visual representations that depicted women in Etruscan society. She said she focused her study on Poggio Colla, an Etruscan archaeological site in Vicchio, Italy.

“Cloth, whether we can consider that worn or draped over something, can communicate a great deal of information,” Meyers said.

The Etruscans were an ancient civilization that lived around the eighth century B.C. in Italy, before the Romans came to power. Many historians believe some of the characteristics of Rome’s government originated in Etruria.

Meyers showed several images of Estruscan artifacts, including a scene of several figures working on a giant textile loom carved in a wooden chair. She said the scene reveals that textiles were more than just a domestic hobby or craft but rather a public display that required intricate and large equipment to perform.

“There are examples on the visual record in the early part of the Etrsucan period that [show] they are taking time to represent women making textiles,” Meyers said. “Not just for a domestic use, but for a ceremonial purpose or function.”

Meyers showed further examples of excavated artifacts from Poggio Colla, such as cloth, ceramic visuals and a sarcophagus lid that showed images of textile production on a large scale. She said the Etruscans are known for portraying “transitions of life” moments such as weddings and funerals.

Classics graduate student Zachary Leh said Meyers’ research on gender in the Etruscan period explores an area that is not commonly talked about in her field of study.

“I think a lot of people who look into classics fail to consider … some things like gender inequality and sexuality,” Leh said. “But [Meyers] is really digging into what is happening with gender during this time period.”

Michael Thomas, director for the Center for the Study of Ancient Italy, said most archeological evidence supports the standard view of women as domesticated textile artisans, but Meyers’ evidence proves otherwise.

“Textiles can be indicative than something greater than this accepted role of women in the ancient world,” Thomas said. “Textile production isn’t just this thing that’s happening in a house. … These [productions] may have been put on display as symbols of wealth and status.”