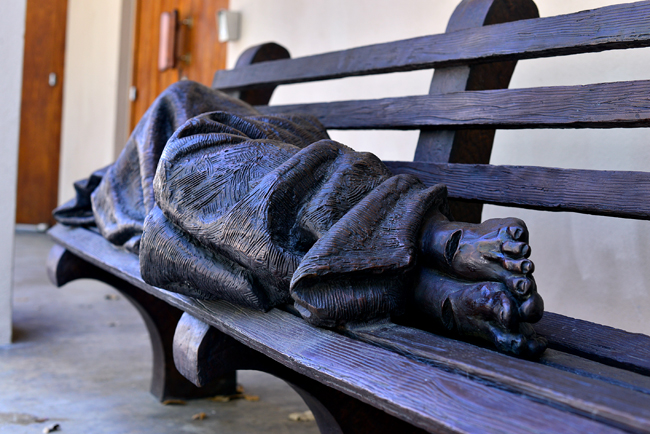 The man lies on a bench on Brazos Street near Central Presbyterian Church.

At first glance, he looks like a real person — passersby typically avert their eyes — but the man is actually a bronze statue, an art piece called “Homeless Jesus.”

Pastor Joseph Moore said most people turn away from the figure until they realize they’re walking by a statue.

“There’s this visible change on their face,” Moore said. “Within that change is room for people to look at one another differently, and we hope that’s what the statue inspires.”

Canadian artist Timothy Schmalz first created the “Homeless Jesus” sculpture with the goal of placing the statue in cities across the world. Moore came across Schmalz’s sculpture in 2013 while flipping through a magazine. He then mentioned it during one of his sermons. A few weeks later, an anonymous donor called wanting to bring the piece to Austin.

After Moore told the donor the costs of attaining the sculpture, the donor said he’d give him a check within the week. Moore, a board member of the organization Front Steps, was more than willing to get the “Homeless Jesus” sculpture to Austin.

“We had no plans to raise the money… it kind of just fell in our lap,” Moore said.

The sculpture finally made its way to Austin in late February, but Moore said the church had to delay installation. Moore wasn’t the only one affected by the piece — Pope Francis had requested the work be placed in Rome after he saw the piece in an art show at the Vatican.

“The pope was moved by the piece so much that it was the only piece he stopped at and was praying over,” Moore said. “He even reached out and touched it.”

“The [shelter’s] staff has been very moved by the sculpture because it portrays homeless people in a very humane, dignified [and] almost holy way,” Moore said. “Not more holy, but just holy, because they’re human, which is the whole point.”

The donor commissioned “Homeless Jesus” in memory of Rose and Jim Lancaster, who were part of the ARCH program. This prompted their family to create the endowment, which has raised over $100,000 since the dedication.

Moore said the fund will help the homeless pay for social workers, toiletries and, in the future, mental health assistance.

Moore said Austin has not made homelessness a priority, and it is important to provide mixed, permanent supportive housing. Austin ranks as the number one economically segregated city in the U.S., according to a 2015 report by the University of Toronto researchers. Moore said segregation in the city is a moral issue.

“We’re not glorifying homelessness,” Moore said. “We need to end homelessness, and this city could do it if it wanted to. What we hope is the sculpture elevates homelessness to a point that people are actually motivated to fix it.”

Expanding the city’s idea of community and broadening its understanding of family, Moore said, is key in assisting those who struggle to break out of the system.

“You can only have a door slammed in your face so many times before you say, ‘I’m not even going to try and open that door anymore,’” Moore said. “As a city, we can keep opening doors.”