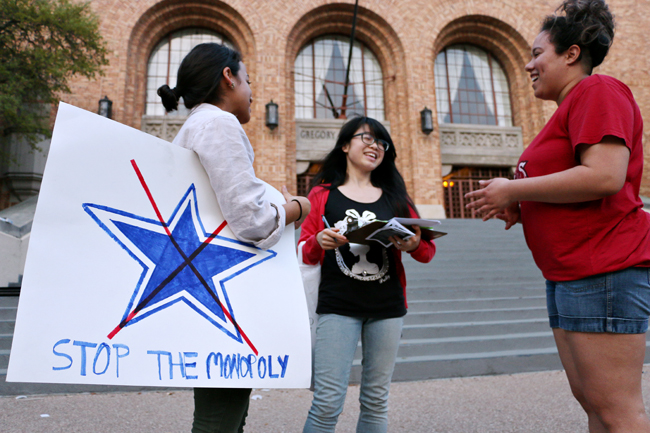 Students Against Sweatshops protested a new 10-year merchandising agreement between UT and 289c Apparel, which protesters allege has exhibited a pattern of labor violations in developing countries.

Under the contract, 289c Apparel, which specializes in making university-themed clothes, would produce collegiate merchandise for UT.

At the protest rally held at Gregory Plaza on Wednesday, the organization’s leaders claimed that the University administration has systematically ignored the concerns of the student body regarding 289c Apparel’s harmful labor practices.

The protest represented the organization’s latest efforts against the University’s involvement with 289c, according to psychology sophomore Andrea Flores.

“In the beginning of the semester, we caught wind that 289c was trying to get on our campus,” Flores said. “So we sent out a [Freedom of Information Act] request to get some more information, and, around the same time, we had workers from Bangladesh come on campus and speak out against sweatshops. Finally, surprisingly, we got a meeting with Craig Westemeier, who is the assistant athletics director for UT, which is huge.”

Flores said the meeting was not productive because Westemeier refused to admit that there was a bidding process occurring for UT’s merchandising contract.

“He flat out denied that there was even a bidding process going on,” Flores said. “We asked that there be community dialogue before we make this huge decision, but he said, and I quote, ‘Right now, we don’t have anything to have a community gathering for.’ Again, this was three weeks before 289c was chosen to be UT’s next licensee.”

UT alumnus Achilles Morales spoke at the rally and said the new business relationship could affect the University’s affiliation with the Worker Rights Consortium, a watchdog organization that reports back to the University regarding labor rights violations perpetrated by its suppliers.

“When the University of Southern California signed an agreement with 289c, they ultimately disaffiliated with the [Worker Rights Consortium] because the company was under too much pressure from the organization,” Morales said. “We are concerned that the same thing could happen at UT.”

Texas Sports reported that UT remains committed to ensuring the workers creating Texas products have fair working conditions. The University will conduct factory visits and continue its relationship with the Worker Rights Consortium and the Fair Labor Association, according to the report.