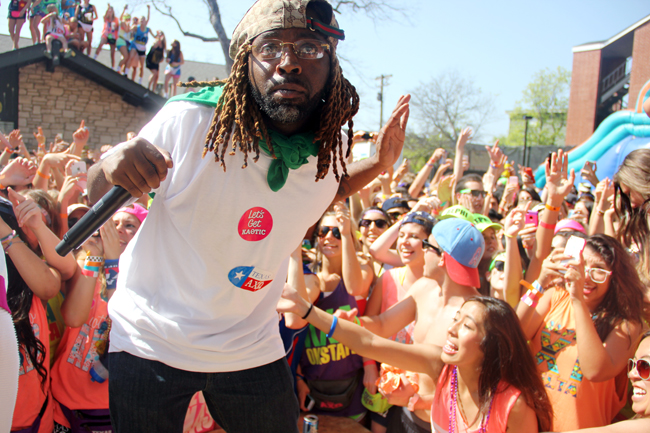 Students dance to to the Yin Yang Twins during Roundup at ZBTahiti in March of 2013.

For eight decades and counting, RoundUp has been the highlight of UT’s spring social scene — and this year is no exception. The weekend has gone through many evolutions through the years, but the highlight of modern RoundUp festivities is clear: the wide variety of live performances taking place across West Campus. Here are our recommendations for some of the top performances you'll want to check out.

Asher Roth never listened to hip-hop as a kid — his parents preferred Bruce Springsteen and Dire Straits. But after Roth listened to Jay Z’s “Hard Knock Life (Ghetto Anthem)” for the first time, he decided his path ahead was clear: Roth would become a hip hop recording artist. His origins in suburban Philadelphia didn't make him a natural fit for the genre, which at the time was obsessed with drugs, car rims, and guns, but Roth decided to take a leap of faith. His breakout hit “I Love College,” with its catchy chorus and witty lyrics, is just one example of what Roth is capable of doing with a microphone and a beat. Check him out at Sammy Carlos n' Charlies at 4:00 p.m Friday.

Competition in rap is fierce, but Tyga — whose name is an abbreviation for Thank You God Always — has found success since the beginning. At just 18 years of age, his debut mixtape Young on Probation led to a deal with Young Money Entertainment and a Grammy nomination. He recently released Fan of a Fan: The Album with Chris Brown, and the Kanye West-produced The Gold Album: 18th Dynasty is coming down the pipeline. His hits “Ayo”, “Faded”, and “Molly” might not align exactly with what his name stands for, but his swagger and his simple lyrics make his live performances energetic and exciting. Tyga will perform at Sigma Chi Saturday at 2:00 p.m.

Houston rapper Riff Raff, coming hot off of his major label debut studio album Neon Icon, will also be performing this weekend. In 2005, Horst Simco was just some guy passing out CDs of himself rapping over other artists’ beats in local shopping malls. Determined to become a star, he tried out for every reality show known to man and was lucky enough to be casted in MTV’s “From G’s to Gents”. He immediately got the MTV logo tattooed on his neck. This probably was a bad decision, as he was eliminated in just the second episode of the show, but fans loved his charismatic outfits and humorous improv. His career skyrocketed and hasn’t slowed down since, and his cult following only adds to his status as a real-life-meme. Check him out at Phi Psi Saturday at 4:30 (but get there early — and expect a huge crowd).

Capping off the list is Big K.R.I.T., who is known best for his song “Country Shit,” featuring Ludacris and Bun B. Big K.R.I.T.'s initial jump into stardom was on Wiz Khalifa’s Kush & Orange Juice when he both produced and rapped in “Glass House.” Since then, he has released two albums, and his latest record, Cadillactica, received universal acclaim. Produced with a slight indie twist, the record contains some of the most diverse production and detailed storytelling any rap artist has to offer. His fearless pursuit of the truth and philosophical outlook on life make for some great songs in “Pay Attention” and “Soul Food”. His live performance is sure to be an absolute hit. Check him out at Phi Delt Saturday at 1:00 p.m.

Ready to hit the parties? Make sure to check out our RoundUp Survival Guide.  Do you march to a different drum? Here are some other Austin festivals you can check out.