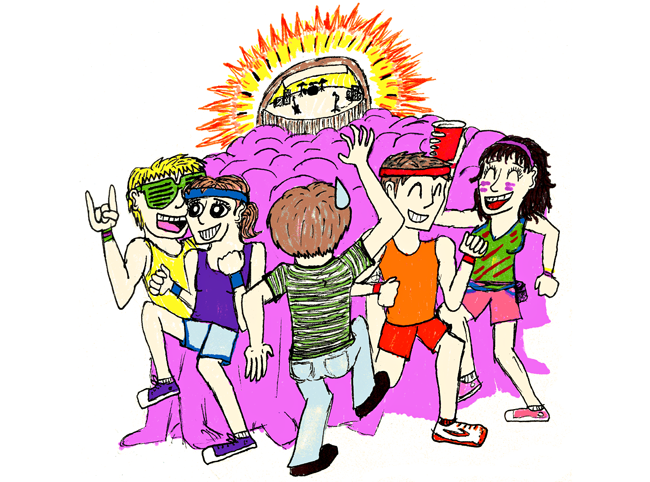 The neon invasion has begun. Across campus, RoundUp attendees are suiting up in their fanny packs and securing their wristbands, preparing themselves for the weekend to come. If you're not participating yourself, RoundUp can seem a little terrifying — and West Campus might, to you, look like a war zone.

Here's the good news: West Campus is just one area. Not everyone in this city is spending the weekend flocking to the next party, and crawfish boils aren't Austin's only food source. There's a lot happening in Austin this weekend that doesn't require a RoundUp wristband. Here are five events you can check out if want to avoid the drunken crowds.

Forty Acres Fest is a day-long festival run by Campus Events and Entertainment featuring live music, performances by comedians and dance companies and booths from a wide variety of student organizations. In addition to the events that begin at 2 p.m. in Main and South Malls, Ra Ra Riot and Smallpools will put on headlining shows beginning at 7:30 p.m. The event is completely free for UT students.

“Ten miles is tough, ten miles is different, ten miles feels great,” the website for the Austin 10/20 boasts. If you want to get out and get active this weekend, try running ten miles to the sweet soundtrack of live music from local bands including Piqued Jacks, The Vantage and Shadow of Whales. One stage is located every half mile along the ten-mile course, which starts and ends in the Domain. Watch the runners suffer, or participate in the race yourself – it’s $90 to run.

The Zilker Park Botanical Garden is celebrating the arrival of spring with its annual garden festival on Saturday and Sunday from 10 a.m. to 5 p.m. There will be live music, a flower show and vendors a-plenty in addition to the normal blooming buds in the garden. The event costs $8, plus $5 for parking if you want to drive.

This year marks the tenth anniversary of the Austin Urban Music Festival, which will attract over 10,000 people to Auditorium Shores over its two days. The Festival was first created as an alternative event for families spending time in Austin over Texas Relays weekend, and with the goal of celebrating Austin's African American community. It has evolved into the largest Afro-Centric festival in Central Texas. Tickets to the festival are $36.99 for a day pass or $65.99 for both days.

Don’t brass-k yourself what you should do instead of Round Up – HONK!TX is here to provide a weekend of entertainment. Local brass bands are going to spend their weekend performing in venues around Austin including Spider House, Trudy’s and down South Congress as part of HONK!, a countrywide festival that celebrates brass music. All events are free and open to the public, so grab your brass-loving buddies and make your way out to one of the shows.