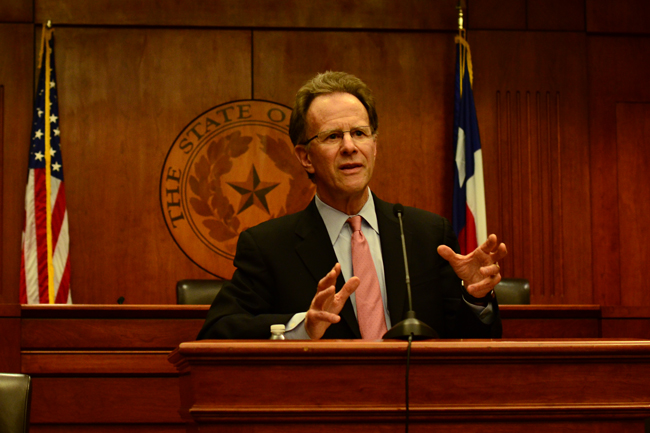 To improve immigration policy, lawyers should focus on increasing public awareness of the issues U.S. immigrants face, a lecturer from the U.S. Department of Homeland Security told students Thursday.

“We had to contextualize [unconstitutional blockades] and take them out of just an immigration context,” Guttentag said. “Part of that was building public awareness. Anthony Lewis, who used to be the Supreme Court reporter for the New York Times … started to elevate the issue based on many conversations and soliciting comments and explaining what the issues were.”

Church workers, Guttentag said, paid a price for bringing awareness to the need for immigration reform.

“Churches and other places gave sanctuary to refugees from Central America whom the United States was going to deport immediately without giving them a fair opportunity to demonstrate that they qualify for asylum,” Guttentag said. “The church workers were prosecuted — a number of them were convicted.”

Guttentag said collaboration is necessary to develop a legal theory persuasive enough to win immigration cases in the courtroom.

“[It is important to] use connections with scholars and academics to puzzle things through,” Guttentag said. “The challenge as a litigator is to sift and distill and to think about which of those ideas … are going to move and work in a courtroom.”

“We definitely try to think about creative strategies for representing our clients that involve everything from having expert social workers or mental health experts talking about our client situations,” Gilman said. “[We have] faculty from the sociology or anthropology departments describe country conditions in the home country as relevant for asylum claims.”

“For federal courts and state courts, you can file your documents online,” Alexander said. “For immigration courts, you have to mail it or give it to them. They are so behind, and okay, it’s the 21st century —  so you [should be able to] submit stuff online.”