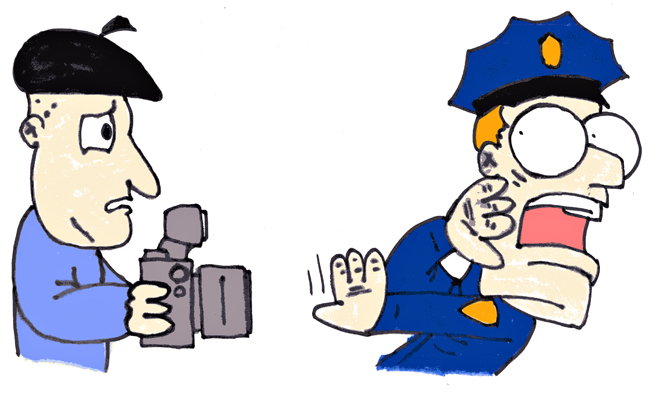 One Texas legislator is aiming to limit citizens’ ability to record police officers from close distances, but the bill has generated significant opposition.

Thursday, Rep. Jason Villalba (R-Dallas) postponed a public hearing on his bill, HB 2918, which would make it illegal for citizens to record police officers from closer than a 15-foot distance. People openly carrying firearms would be required to stay at least 25 feet away from an officer to record, Villalba said.

Villalba said he did not intend to restrict the rights of citizens with his bill.

“We didn’t set out to do that,” Villalba said. “What we set out to do is create a balance between the officers’ safety and security and the ability for people to keep law enforcement accountable.”

“We are very ‘pro’ people video taping officers,” Dusterhoft said. “It helps us be held accountable. We think it helps citizens see things, but we just want it to be done in a safe manner.”

Antonio Buehler, founder of the Peaceful Streets Project, which works to limit street violence from police officers, said he believes the bill limits citizens’ freedom, and especially impacts those who do not have other means of holding law enforcers accountable.

“[The bill] would take away the one tool they have to try and hold the police accountable,” Buehler said. “Because these people aren’t necessarily able to use the political system, they don’t have support in the courts and in regard to public opinion.”

According to Buehler, it is not always possible to capture detailed recordings from 15 feet away in certain real-life scenarios.

Villalba said modern technology means recording devices are able to capture clear audio and visual information, even from a distance.

The bill makes exceptions to the law for members of the media. Media outlets that have the “direct or indirect objective to disrupt or agitate a peace officer during the officer’s performance of duties” would still be restricted by the law.

“Personally in the age that we live in, the digital age, everyone has the ability and, I think, the right to consider themselves a journalist of some sort,” Michael Johnston, government senior and volunteer with the Peaceful Streets Project, said.

Johnston said there is a common misconception that people recording officers are trying to make an officer’s job more difficult when, in reality, they are trying to monitor police interactions and watch for the safety of officers and civilians.

“When you introduce more discretion into a police officer’s role in interacting with citizens, you end up creating a mentality of duty of us versus them,” Johnston said. “That police are on one side, and citizens are on another, and there should be some defined separation, in this case 15 feet or 25 feet.”