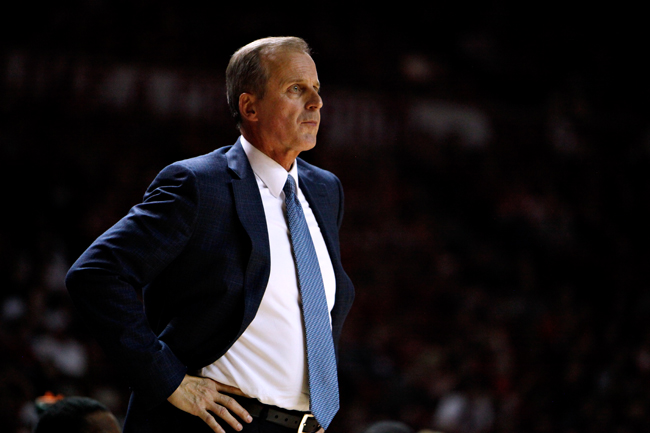 Rick Barnes’ tenure at Texas has officially come to an end.

Texas announced Sunday that Barnes is leaving the program, ending his 17-year career with the Longhorns. With 402 career victories, Barnes leaves the Longhorns as the winningest coach in school history.

“I am grateful for the 17 years I’ve had at Texas,” Barnes said.

When Barnes, now 60, arrived in 1998, he took over a middling Texas team that hadn’t reached the Final Four since 1947. Barnes quickly elevated it to a new echelon. In his first 10 seasons at Texas, he led the Longhorns to 10-straight NCAA Tournaments, appearing in five Sweet 16s, three Elite Eights and one Final Four, in 2003.

But the Longhorns have failed to match that success in recent years. They haven’t advanced past the round of 32 in the NCAA Tournament since 2008, and they missed the tournament altogether in the 2012–2013 season.

Texas appeared to be on the upswing coming into this season. After a surprising third-place finish in the Big 12 last season, the Longhorns returned all five starters and added a top recruit in 6-foot-11 forward Myles Turner. The team entered this season ranked No. 10 in both the coaches and AP polls.

After a strong start to the season, the Longhorns slumped to an 8–10 record in the Big 12, barely backing their way into the NCAA Tournament. They turned in perhaps their worst performance of the season in their only tournament game, scoring a season-low 48 points in a loss to Butler.

Despite the disappointing finish, Barnes said men’s athletic director Steve Patterson told him he would be brought back.

“I was told after our last game that I would be back as coach,” Barnes said. “Things changed.”

According to multiple reports released Thursday, which Barnes said he believes were leaked by the school, Patterson told Barnes he would need to make changes to his coaching staff if he wanted to return.

“There was no way I was going to put my staff out there and say, ‘You’re the problem,’” Barnes said.

Barnes said he believes the Longhorns are close to returning to national prominence, and he wanted to stay and “finish the job.” Although he won’t get that chance, Barnes said he isn’t bitter about the way his tenure ended.

“No one could ever diminish what I think about the University of Texas,” Barnes said.

In addition to his early success, Barnes led the Longhorns to three Big 12 Conference championships with 20 or more wins in 15 seasons.

Former Longhorn T. J. Ford whom Barnes had a close relationship with, was even on hand for Barnes’ farewell press conference Sunday.

Barnes plans to coach again, and he said he believes he will find a new job more quickly than people expect. Before he looks ahead, however, Barnes made sure to look back.

“I don’t have any regrets,” Barnes said. “Truly, I love the University of Texas. I always will.”