Column: Rick Barnes will be remembered for more than his record 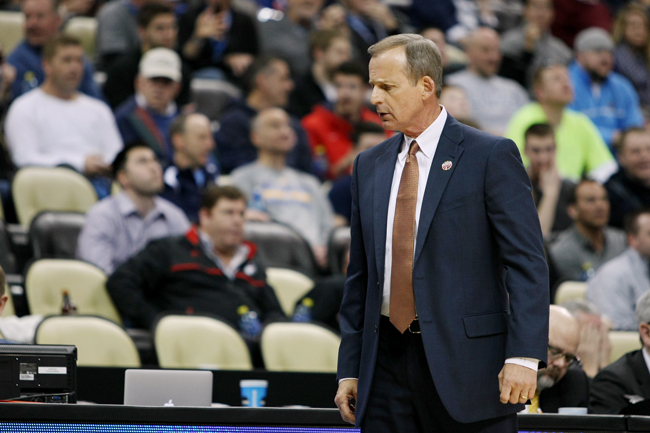 “Dear Rick Barnes, I never thought this day would come,” Ford tweeted. “I dreamed of a fairy tale ending. You put Texas Basketball on the Map. Love you.”

And it should have been a fairy tale for head coach Rick Barnes. Until Barnes left Clemson for Texas 17 years ago, UT’s program was irrelevant.

In the first 59 years of the NCAA Tournament, Texas made it just 16 times. In the next 17, under Barnes’ guidance, Texas made it another 16 times. He won more than 400 games and got Texas to the Final Four once.

Barnes also had a knack for putting legends in a Texas uniform. First it was Ford. Then it was Kevin Durant. Before Barnes, Texas’ only well-known basketball player was Slater Martin back in the ’40s.

Barnes made Texas basketball a part of the national conversation for the first time.

But focusing exclusively on his accomplishments on the sideline does Barnes a disservice. That’s not what he is and not what he wants to be remembered for. Barnes wants to know he did all he could for his players as their coach and mentor.

“We can talk about the program, the wins and losses — that’s not what it’s about,” Barnes said. “It’s about the relationships.”

Ford would call Barnes at 1 a.m. some nights and not just to talk about an upcoming game. Sometimes, Ford just had general questions about basketball. Once, he wanted to ask why Madison Square Garden is called the Mecca.

Barnes was just as generous with his players this year. He made time for senior forward Jonathan Holmes after Holmes’ concussion and talked to freshman forward Myles Turner after particularly disappointing games. Barnes was always there for the players and his staff.

At a press conference Sunday, Barnes hinted at an ultimatum he’d been delivered by men’s athletic director Steve Patterson: shake up his staff or leave himself.

After Barnes’ assistants heard the news, they called him one by one and offered to vacate their spots. But Barnes wouldn’t hear it.

“There’s no way I could do that,” Barnes said. “That would be saying this is about me.”

That’s just the man Barnes was. He was a great coach, but a better person. He said he will be rooting for Texas down the line, and even gave some advice for the coach who will succeed him.

“Enjoy it — love it,” Barnes said. “You’re getting ready to walk into something really, really special.”

In an ideal world, Barnes would have met the high expectations he set for Texas in his first 10 years and eventually left on his own terms, after cutting down the nets for Texas’ first championship. His name would hang in the rafters alongside Durant’s and Ford’s.

But basketball is a business, and the world isn’t ideal. Barnes said he knows that.

“You want the fairy-tale ending and it all to end right,” Barnes said. “Sometimes, you don’t always get what you want in life when you want it.”