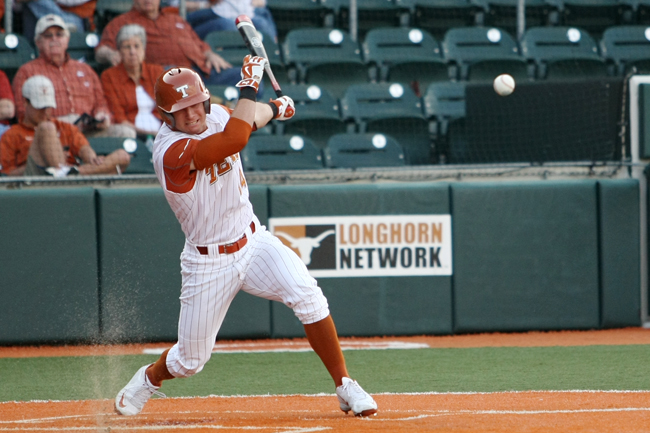 Despite the win, Garrido was visibly frustrated with the team’s performance. It was Texas’ second-straight midweek game in which they struggled, after last week’s extra-inning loss against UT-Arlington, 6–5.

Garrido said he wasn’t upset; rather, he wanted the Longhorns to learn from their Tuesday night struggles.

“I’m not angry,” Garrido said. “I’m just trying to explain to them why we have to be disciplined and why we have to come ready to compete and what it takes to get to the next step. We’re not at the level of championship baseball.”

But No. 12 Texas (17–11, 5–1 Big 12) will look to rid itself of the midweek blues Tuesday night against Texas A&M-Corpus Christi. The Longhorns host the Islanders (11–12, 3–6 Southland), who are coming off a 2–1 series loss against Stephen F. Austin. Texas A&M-Corpus Christi enters the contest having lost seven of its last eight.

The Longhorns will try to right the ship Tuesday night after a disappointing sweep against Nebraska this weekend. The Longhorns struggled at the plate, where they were held to three runs on 12 hits in the three-game series against the Cornhuskers.

The Longhorns will also look to solve their mid-week pitching problems. In Texas’ loss to UT-Arlington, starting sophomore pitcher Kacy Clemens threw four innings and only allowed one run, but Texas’ bullpen gave up five runs and blew a three-run lead in the ninth inning.

After the snafu in Arlington, Garrido moved pitcher Josh Sawyer to the Tuesday starting role in hopes of revitalizing the struggling sophomore lefty.

But in his first Tuesday start of the season, Sawyer got rocked early against Texas State. He gave up a home run on the first at-bat of the game. Sawyer only lasted three innings and gave up two runs.

“We wanted to see what [moving Sawyer] would do one way or another,” Garrido said. “We’ll find the answer to this.”

The Longhorns will need a good outing from their starting pitcher Tuesday night, as Texas looks to get return to championship-level baseball.

“We can’t just flip that switch,” Garrido said. “If you’re going to get better, you have to learn something from last Tuesday and apply it to this Tuesday. … We have to be able to win a lot of games in a row and be able to win after you lose and win on Tuesday when you’re really tired.”