Not On My Campus prompts dialogue about sexual assault 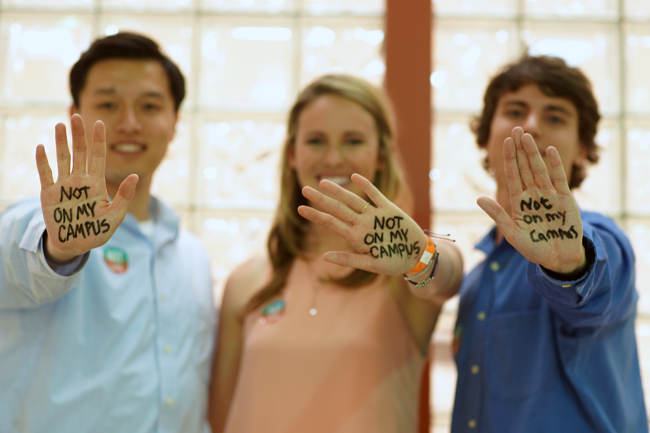 Over the course of the last week, Not On My Campus, a student-led sexual assault prevention movement, garnered national attention and earned 1,400 signatures on a petition to stop sexual violence on UT’s campus.

Sexual assault is a prevalent issue on college campuses across the country, and the full scope of the problem at any given university is often hard to determine, according to Erin Burrows, interpersonal violence prevention specialist for Voices Against Violence.

According to the Texas Association Against Sexual Assault, 80 percent of Texans who are raped never report the incident to law enforcement. Many national studies have found that nearly one in five college women are sexually assaulted over the course of their college experience, according to a report released by the organization.

Not On My Campus UT launched an online pledge asking signers to support and empower assault survivors, work with campus resources to promote safety and engage in practices of bystander intervention. Qian said signing the pledge amounts to a public declaration to stand up against sexual assault, which he hopes is the first step in putting sexual violence prevention into practice.

The movement has not been limited to students — President William Powers Jr. and former football head coach Mack Brown both participated in the social media campaign last week. Members of Not On My Campus said they hope support from alumni and faculty will help their message trickle down to the entire community. UT spokesman Gary Susswein said the campaign helps promote a no-nonsense attitude toward sexual assault prevention on campus.

“By participating in the #NotOnMyCampusUT campaign, [Powers] is trying to help our students spread that message,” Susswein said. “He is so proud of the stances that our students have taken.”

In addition to a social media campaign, the group members plan to establish a campus organization and expand outreach through various prevention programs.

“We don’t just want to be an initiative,” Herbst said. “We also want to be a continuous, strong organization here on campus and be an intermediary source between the student body and the administration.”

The group plans to conduct bystander-intervention training, hold self-defense classes and work with incoming freshmen to provide survivors with the help and support they need.

“We know a lot of freshmen are terrified when they come in and experience this type of culture for the first time,” Cocanougher said. “We want to be able to bring awareness about it and educate people about the resources on campus.”

Burrows, who has advised Not On My Campus since the fall, said reaching over 50,000 students with any campaign is challenging and social media can be an effective way to spread the simple message of consent.

“When people are talking about the issue of sexual assault, they talk about the prevalence rates in Greek community, and that is true,” Burrows said. “But it’s not a problem specific to Greek community — it’s a problem in all communities.”

Since the launch of the campaign on March 23, campus leaders from St. Edwards and University of North Texas have contacted the group seeking advice on how to establish Not On My Campus initiatives at their schools.

Interested in how you can prevent sexual assault on campus? Full event listings for Sexual Violence Prevention Month at UT can be found here.